With food stamps under fire, new solutions to combat hunger in demand

As winter sets in across North Carolina, concerns about meeting the needs of the hungry are increasing.

The increased anxiety being experienced across the state is the result of plans to tighten requirements for food stamps, a popular and, many say, essential program now more than a half-century old.

While not a replacement for the reduction in federal programs, some innovative grant and governmental programs from North Carolina are helping to fill the gap in some parts of North Carolina. In particular, a new electronic exchange called NCCARE360 is being rolled out gradually across the state and is already active in several counties. 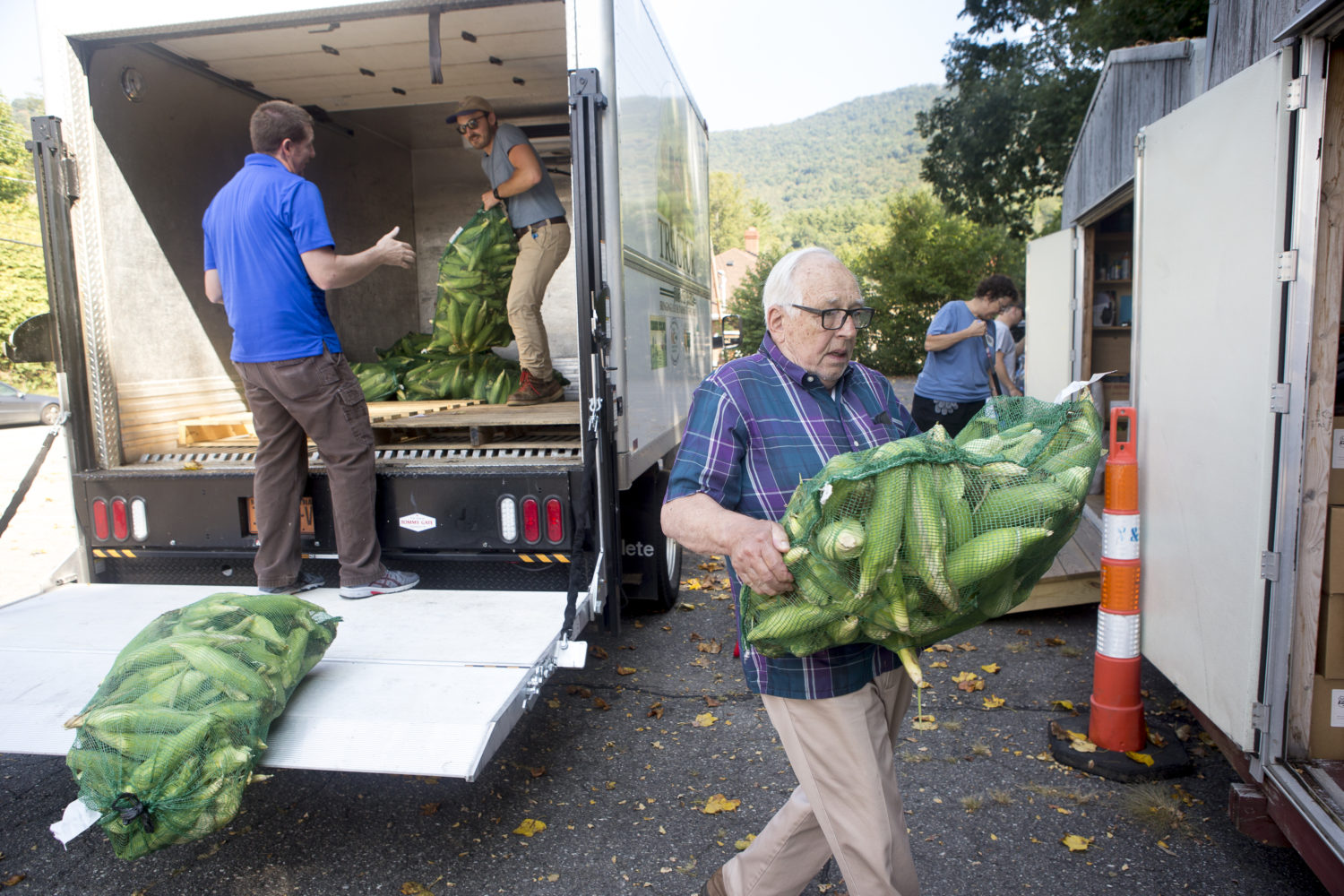 Part of President Johnson’s War on Poverty, the Supplemental Nutrition Assistance Program (SNAP), as it is formally called, is being cut back in stages. It is the nation’s largest food assistance program.

For North Carolinians, one special concern is the Trump administration’s decision to end the flexibility given to states to vary utility allowances by household size when determining food stamp benefits. Instead, the administration plans a single allowance for each state.

In 2017, a one-person household in North Carolina had a $374 per-month allowance built into the formula; a four-person household, $493. The new rule would set North Carolina’s allowance at $356, regardless of household size, with larger potential reductions in food stamp benefits for bigger households than for smaller ones, according to the Washington, D.C.-based Urban Institute.

“SNAP households affected by the change in the utility allowance would have reduced benefits,” said Laura Wheaton, lead author of the Urban Institute’s food stamp study, in a statement to Carolina Public Press. “Given the loss or reduction in SNAP benefits, families may increase their reliance on food banks and other community supports.”

Hannah Randall, CEO of MANNA Food Bank, the Asheville-based nonprofit that distributed 18 million pounds of food in concert with more than 200 community-based agencies over its last year, said the change in food stamp rules would put more people at risk and create greater demand for her agency’s services.

“The SNAP cuts in general are of real concern, not only to us but to the Feeding America network of food banks,” she said.

“It’s a serious concern for people in substandard housing that already can’t afford for their bills to swing when they’re barely making it each month.”

This past spring, Randall set out on an unscientific survey of food insecurity “to get to the heart of the work,” talking to people in their homes, shopping with them, and working with MANNA partners that engage in home deliveries.

“I saw a lot of very resilient people who work very, very hard but are in circumstances where they don’t have a lot of support or connections when things go wrong,” she said.

Now, with various program cutbacks coming out of Washington and local demand for assistance expected to spike, MANNA and other nonprofits are working to strengthen North Carolina’s safety net.

Some recent efforts are starting to pay off.

In the final days of 2019, fresh funding from new community foundations has allowed existing food distribution programs to expand and new households to be reached.

As well, the new NCCARE360 program is connecting people with community resources at no cost. The program is being implemented in five western counties, as well as in several other areas, while gradually being rolled out statewide.

The system will enable doctors, social service workers and other partners to refer at-risk clients to appropriate anti-hunger programs and other community agencies and track outcomes.

The delivery of food to children and adults is taking place across the region in some new and different ways.

MANNA Community Market, launched by MANNA Food Bank in November, is a truck that serves as a mobile pantry and resource center, and it is now wending its way through communities where the Asheville operation doesn’t have a distributor.

“We have mapping that was done by an AmeriCorps VISTA with us on childhood poverty rates that also proved that they statistically correspond to food insecurity rates,” Randall explained. Other GIS mapping helps her agency identify hotspots of food insecurity in general.

When a community remains in need but can’t afford a brick-and-mortar pantry, the mobile pantry provides a more economical solution, Randall said.

During a one-year pilot using 80 pop-up markets, MANNA Community Market distributed 254,000 pounds of food, 50 percent of which was fresh produce, she said.

If MANNA’s mobile pantry represents innovation, the conversion of former hospital foundations into conduits for community giving means greater funding, and some of it is already being applied to hunger.

Established in the lead-up to HCA Healthcare’s acquisition of Mission Health, the former nonprofit health care system, six foundations launched their first rounds of grants in 2019. Those grants address a variety of issues affecting a person’s or family’s well-being.

One of the six, AMY Wellness Foundation, announced $2.5 million in awards to nonprofits serving Avery, Mitchell and Yancey counties and four of its grants targeted food insecurity.

One recipient, TRACTOR Food and Farms, partners with about three dozen farmers and has donated more than 10 tons of food to local food banks.

It also engages in a clinical referral program during which physicians have patients complete a healthy eating survey and can send a prescription for fresh food to TRACTOR at no cost to the patient.

The organization hopes the initiative will emerge as a regional model.

With its funding from AMY Wellness, “We expect to serve 195 households through our Clinical Referral Program and as many as 4,400 households through the Healthy Harvest program where we deliver produce to food pantries that serve Yancey, Mitchell, and Avery counties,” said Michael Graf, TRACTOR’s operations manager.

Prior to the AMY funding, TRACTOR served 1,350 households through Healthy Harvest and 101 individuals through referrals from doctors and a senior center.

Another foundation recipient, Feed-A-Child, which in 2018 provided food to 380 schoolkids a week in Yancey, will now be able to cover their facility and transportation costs. Feed-A-Child has also purchased a van to deliver food to at-risk children on weekends.

“For the first time in its 12-year history, Feed-A-Child will have a permanent home instead of either paying rent, which takes away from our food budget, or operating month-to-month in borrowed spaces,” said Robert Wyatt, the program’s cofounder.

In Burnsville, where Feed-A-Child is based, the poverty rate for children is estimated at 32 percent, according to 2017 American Community Survey data.

In the coming year, all six foundations will make additional grants while Dogwood Health Trust begins its initial funding round.

Created with proceeds from the sale of Mission Health, Dogwood expects to make grants of up to $75 million annually and will focus on big-fix solutions to hunger and other issues affecting an individual’s well-being.

Just after Thanksgiving, a message shot out to social service providers: “It’s official! #nccare360 is up and going in WNC!”

That message from Marla Browne, community engagement manager for NCCARE360 in the western region, gave the all-clear for medical and non-medical service providers to register on a new statewide platform that will direct people to an adequate supply of food, affordable housing, senior services, transportation and other basic needs.

Organizations across Buncombe, Haywood, Henderson, Madison and Transylvania counties started signing up the first week of December. Many more are expected to do so before the electronic system, which will also provide a secure closed-loop on patient and client outcomes, starts making referrals.

For those seeking a regular supply of nutritious food, Randall views NCCARE360 as a platform for writing electronic prescriptions that can be delivered directly to food banks and pantries.

“I think that it will only help to widen the understanding from the healthcare community about social determinants of health and give doctors and other medical providers real options to help people in need besides just prescribing pills or other medical interventions,” Randall said.

“That’s incredibly important. Normally now, it’s pieces of paper and phone numbers and then this person’s left with a deck of things that they have to figure out how to navigate. That can be really intimidating, not to mention time-consuming.”

With a 15-percent decline over the past five years in the number of state participants in WIC, the federal program that provides food to pregnant women as well as children who are 5 and younger, Randall thinks NCCARE360 can boost those numbers and help offset food stamp cutbacks.