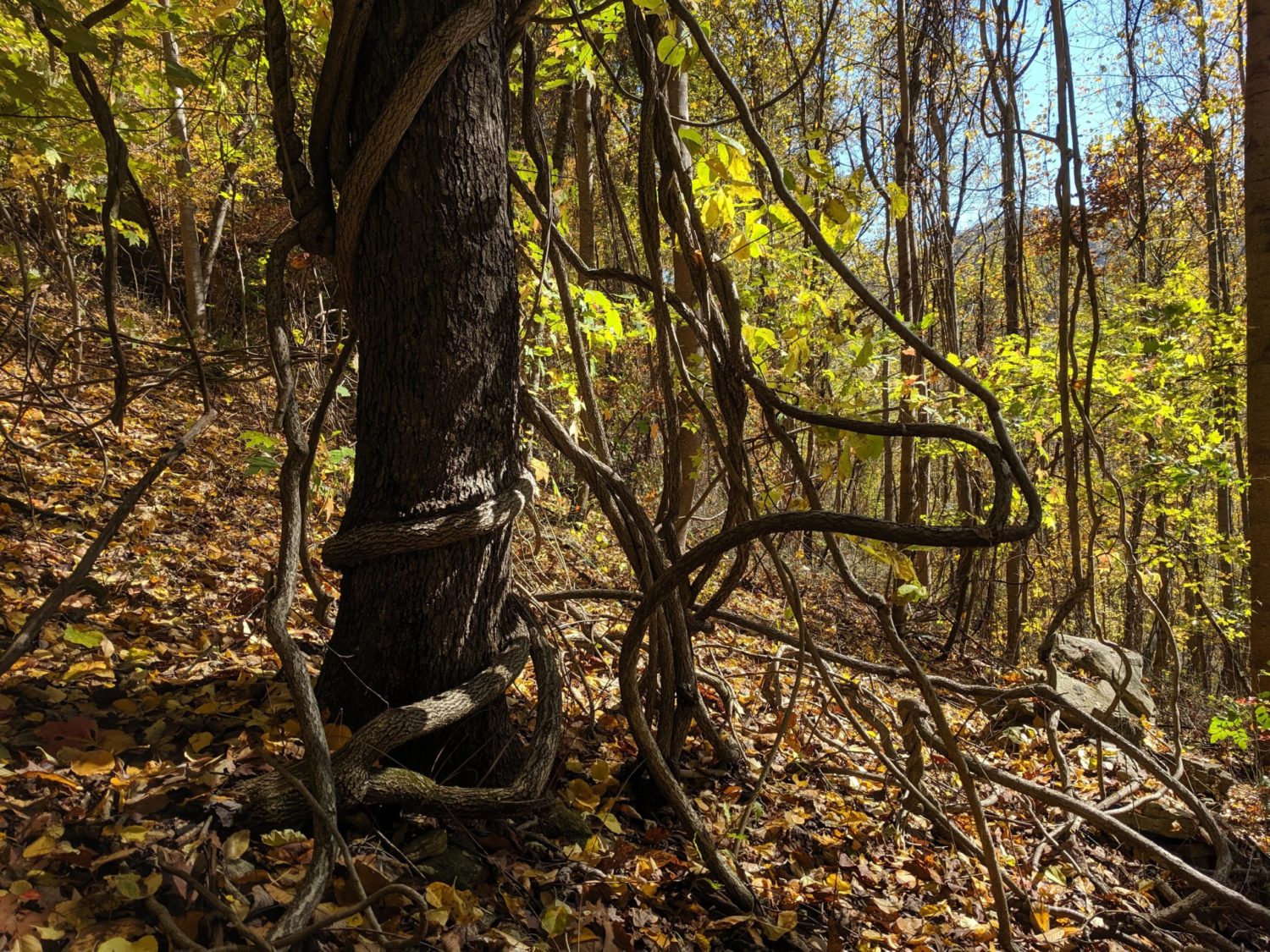 Trees in the forest of the Sandy Mush community in northwest Buncombe County face the threat of invasive oriental bittersweet, which can damage them by girdling. Photo courtesy of EcoForesters

Sandy Mush landowner Vance Garrett has been fighting the advancement of nonnative invasive plant species on his property in the rural northwest corner of Buncombe County for more than three decades at considerable expense.

“I’ve been in the business for a long time just trying to keep them beat back,” said the 84-year-old, who owns roughly 200 acres of mostly forested land in the Newfound Mountains that hem the western boundary of the Sandy Mush community.

“Bittersweet is the worst, and the garlic mustard is about as bad,” Garrett said. “I’ve had some success, but the outlook, long range, is not good,”

Garrett soon may get help soon in containing the nonnative plants.

Forest advocates, conservationists, state agencies and property owners, including Garrett, are joining an ambitious effort to restore thousands of forest acres surrounding the farming community, which is 30 minutes from downtown Asheville. 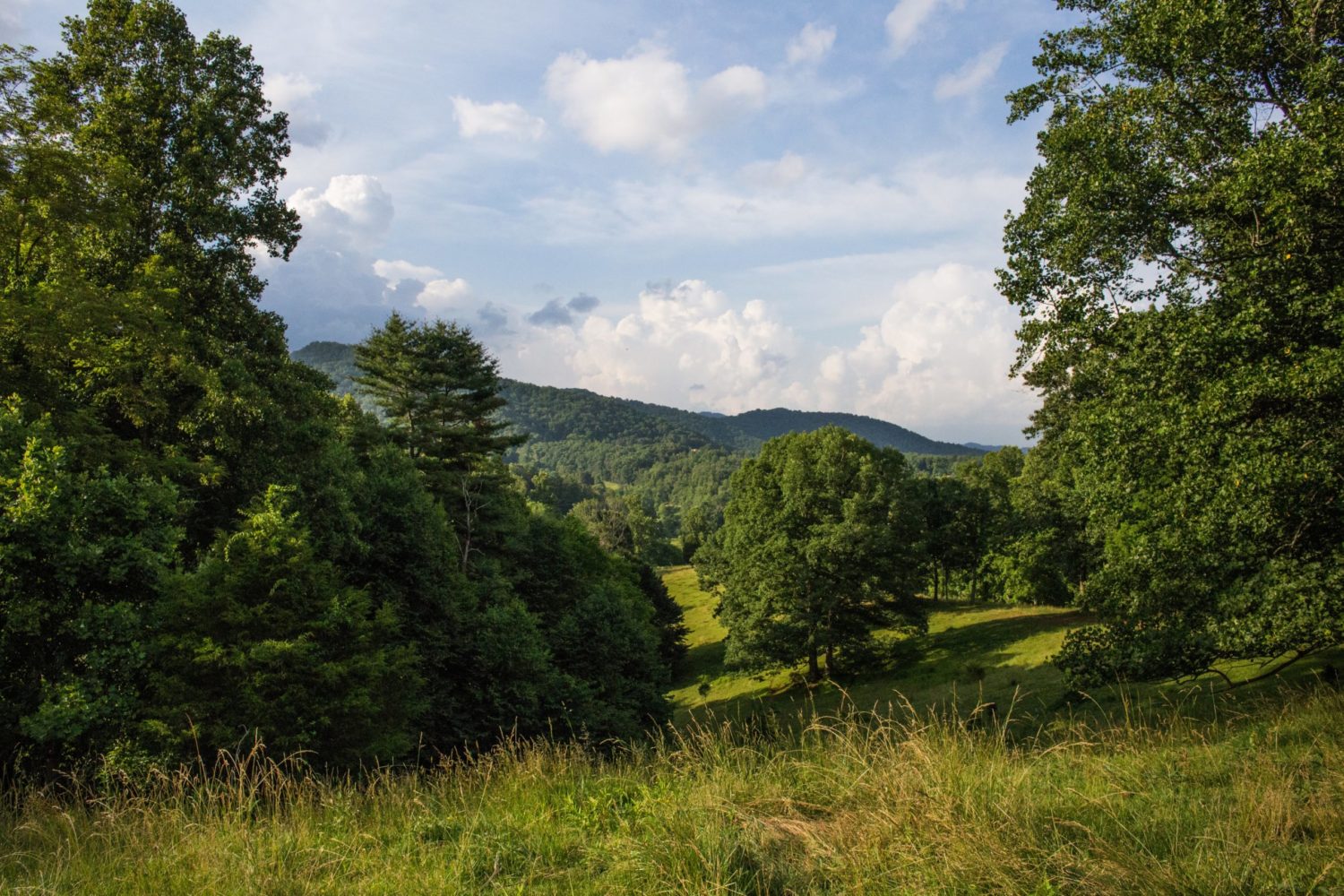 Andy Tait of Ecoforesters, a nonprofit professional forest organization based in Asheville, said the Sandy Mush Forest Restoration Coalition was launched in 2019 in partnership with the Southern Appalachian Highlands Conservancy, based in Asheville, and the Forest Stewards Guild, a national nonprofit focused on forest conservation and management.

The coalition’s goal is to improve forest stewardship in a project area that encompasses a landscape of over 50,000 acres of farmland and timberland, the majority of which is privately owned. The group’s hope is to build a network of community members and stakeholders that will drive the project goals and strategies to rehabilitate the forests of Sandy Mush.

While thousands of acres of private land in Sandy Mush have been protected through conservation easements, Tait said, “The future of the forests is not bright in Sandy Mush without some forest stewardship.”

Much of the timber acreage in Sandy Mush was once pasture, but as the economics of farming has transformed over decades, a significant number of acres of farmland have been abandoned and reforested by pioneering tree species and invasive plants. 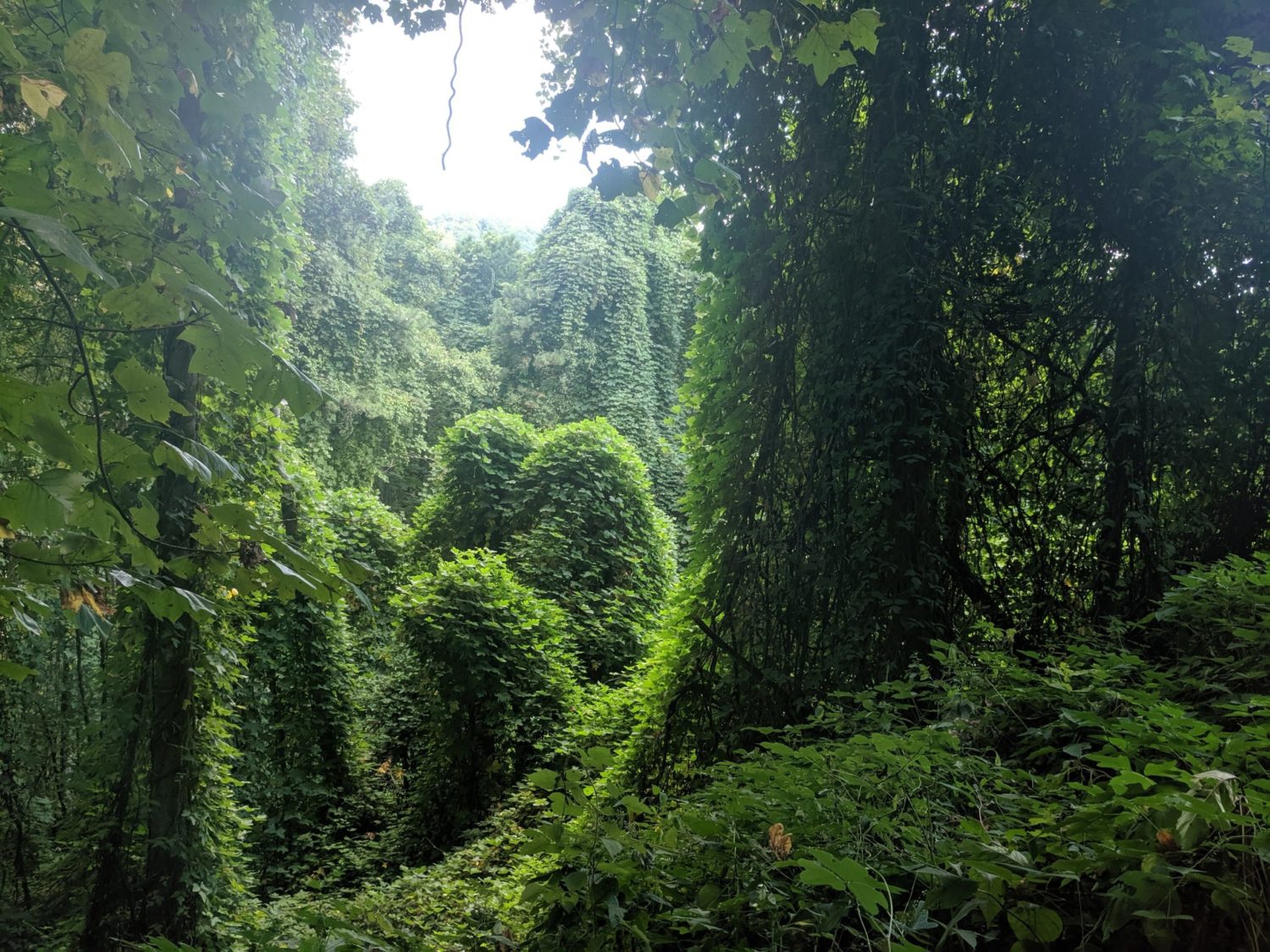 “Sandy Mush happens to have really rich soil,” he said. “That’s what makes it such productive farmland.”

What’s more, the mountain slopes around Sandy Mush are dominated by rich cove forests, hardwood stands that are shady and lush and are an ideal habitat for invasive plants.

Kudzu is the poster child for invasive plants since it grows rapidly, Tait said. However, oriental bittersweet, a woody vine that scales trees and smothers them, may be a more insidious intruder in Western North Carolina.

“Areas of forest in Sandy Mush (are) being slowly destroyed by bittersweet,” he said.

Other lethal culprits are tree-of-heaven, multiflora rose and privet, which can ruthlessly take over the understory of a forest, kill mature trees and prevent new ones from taking root.

“It’s a slow-moving ecological nightmare,” Tait said, and one that began years ago.

It may take decades, but without controlling the invasive plants, the forests will eventually be ransacked by exotics.

Engaging the community around conservation

On Jan. 25 in the Sandy Mush community center gymnasium, EcoForesters, SAHC and the Forest Stewards Guild hosted a daylong event to share information about forest stewardship with landowners in the valley. In attendance were 20 family forest landowners and community members who attended a coalition meeting in the afternoon.

The objective of the project, said Land Hornthal, the communications director of EcoForesters, is to initially engage landowners in the community, build trust and share information about stewarding their forest land for the long term.

“There’s a range of what people want to get out of their property,” Hornthal said. “Some landowners who might be interested in short-term gains to generate revenue. Some are interested in ecotourism or forest products.

“One of the things we are mindful of is not telling people what they need to do with their forest and their land. We realized, to be a true community project and to get genuine buy-in, we need to be transparent and invite them to tell us their needs and concerns and why Sandy Mush is important to them.”

The scope of the undertaking is unique, Hornthal said. To his knowledge, the scale of the project and the group’s approach has not been attempted elsewhere.

Plenty of examples of community-based forestry exist in the U.S. and in other nations, but a typical approach views landowners as “happy recipients of information,” Biemiller said.

“We’re trying to flip that,” he said. “Rather than viewing community members as passive recipients of information about best practices in forestry, our model is to view them as active participants in a collaborative process,” he said. “That’s what gets me excited about this project.”

Private side to forest management effort

While the effort to restore forests may be unique on private land, this month the U.S. Forest Service is expected to release a draft management plan that oversees a million acres in Pisgah and Nantahala national forests.

Among the many issues addressed in the plan, the need to restore the ecology of the forest has emerged as a primary challenge. An aging forest, lack of natural fire, threats from climate change and other management challenges have moved the current condition of the forest far from its desired condition.

Hornthal, who is a leader in a collaborative effort helping direct the creation of the federal forest plan, said he’s hopeful the draft management plan will be successful in increasing the level of forest restoration on national forest land.

However, public lands are only part of the equation in restoring Western North Carolina’s forests.

Sarah Sheeran, stewardship director of the Southern Appalachian Highlands Conservancy, based in Asheville, said, “We are blessed in our region with large blocks of contiguous public lands, but most land ownership is private.

“Considering the suite of environmental threats we all are currently facing, practicing good stewardship and forest management on private land is more critical than ever.”

Her organization has prioritized land conservation in Sandy Mush.

“Sandy Mush is a holdout farming community,” she said. “It’s one of the few places to see open spaces and farmland in Buncombe County.”

In addition to owning more than 2,000 acres, her organization has, in all, protected roughly 12,500 acres through purchases or conservation easements in Sandy Mush.

“We want to follow best practices and be good stewards of our properties and want to be a good model in the community, but it’s challenging with limited resources,” she said.

“Our interest is to take a more sustainable and strategic approach to restoration.”

That means engaging with private landowners who are also invested in the future of the area’s forests.

One of them is the director of Buncombe County’s Cooperative Extension office, Steve Duckett, whose family had farmed in Sandy Mush for several generations.

“Traditionally, forests were utilized for grazing cattle, sheep, goats and hogs,” Duckett said. “That had the benefit of keeping invasives down before anyone knew it was a practice.”

But over the last several decades, families in Sandy Mush and other rural portions of WNC have transitioned from farming as a primary occupation.

“Farms and livestock have become secondary income, supplemented by full-time jobs in Asheville,” he said. “The farm economy is under a lot of pressure.”

As a result, corralling livestock and maintaining fences on steep slopes is troublesome. Most landowners can’t afford to keep up with fencing.

“It costs maybe $15,000 per mile to build fences in these mountains,” Garrett said. “There’s not that much money in the cattle business. It’s been in decline around here all my life, and it’s still going down.”

The lack of relatively open forests has affected wildlife, such as quail, ruffed grouse and songbirds, that require a diversity of habitat types, such as open fields and new stands of forest.

The property includes several hundred acres previously used to raise cattle, tobacco and other crops. As the fields become abandoned over time, white pine, poplar and other pioneering tree species – along with nonnative plants –  took advantage of the open conditions.

The payback of the commission’s comprehensive management is one of the state’s healthiest populations of bobwhite quail on public land and dozens of songbirds that are particularly sensitive to habitat.

“Quail can’t just get up and move,” Henline said.

“They have to have suitable habitat to keep bumping out. The problem is that the game land is an island. Hopefully, other landowners can see our results, and we can demonstrate what they can do on their land.”

Fighting invasive plants can be costly

While removing invasives and improving forest stands may provide a significant public benefit, such as more abundant game and scenic beauty, finding the right economic incentives for cash-strapped landowners to manage invasives and engage in other forest restoration practices is a high hurdle.

Since invasive plants have no regard for obeying fence lines, one owner’s meticulous removal of exotic plants will be undone if his neighbors determine that invasive removal is too costly and the benefits too sparse.

Hornthal said managing invasives has a price tag of roughly $250 per acre plus future maintenance costs. And depending on the level of infestation, the costs of treatment can soar.

The return on investment? Well, that’s the rub.

“We haven’t found that silver bullet yet,” he said. “The present financial incentives are not enough.”

He hopes the coalition will bring more dollars to the table, potentially through grants or by pooling funds.

The short-term goal, however, is to begin to engage landowners and highlight the connection that there are plenty of tangible benefits derived from a healthy, sustainable forest, such as diverse habitat, scenic beauty, resilience to climate change and quality of life.

Ultimately, Biemillier said, “We have to find a way to live with invasive plants. They’re not leaving.”

But if there’s anyplace where a community forestry project has a chance of success, it’s here.

“Not only is there already a large conservation footprint, but more importantly, Sandy Mush has a vibrant social fabric,” he said of the mix of landowners in Sandy Mush, which includes New Agers, retirees, back-to-earthers and families who have farmed for generations. “People here really care about the land.”

Garrett, whose family settled in Sandy Mush 150 years ago, agrees.

“I’m not in it for my personal interest,” he said.

“These forests are a very valuable natural resource. There’s a moral obligation to try to preserve them.”