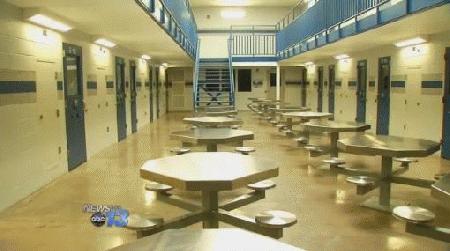 The confirmation of coronavirus in a North Carolina state prisoner raises heightened concerns that the disease could spread rapidly through the prison system, as it has in jails and prisons in other states. Image courtesy of WLOS News 13

A prisoner in state custody has tested positive for the new coronavirus, the N.C. Department of Public Safety confirmed late Wednesday.

The man, who is incarcerated at Caledonia Correctional Complex in Halifax County, is in his 60s and was being held in a housing dormitory, according to a statement.

On March 24, the man showed symptoms of a viral illness and was quarantined, the department said. The next day, a sample was taken to test him for having COVID-19. On Wednesday, the case was confirmed.

He is currently in stable condition, according to DPS. In line with recommendations from the Centers for Disease Control and Prevention, the entire housing dorm is now in quarantine.

Public health experts have been warning that an outbreak of COVID-19, the disease caused by the new coronavirus, in the state’s prisons and jails is a matter of time.

Commissioner of Prisons Todd Ishee wrote in Wednesday’s statement that it “is not a surprise” to have COVID-19 confirmed inside a state prison, and the prison system has been preparing for this day.

The Department of Public Safety, which oversees the prison system, has taken several steps to limit the introduction of the illness to its prisons and to limit its spread once inside. Public health experts have lauded those steps but said they are not enough.

On Tuesday, CPP reported that a staff person at Maury Correctional Institution in Greene County reported being tested positive for COVID-19.

What will happen next

Public health experts expect the disease to spread rapidly within prisons once it is introduced, both due to the close confines of prison conditions and based on the rapid transmission of the illness in jails and prisons around the country.

How, exactly, COVID-19 will spread is unknown, according to David Rosen, a public health researcher at the UNC Chapel Hill School of Medicine. There is just not enough data to make that prediction, Rosen wrote to CPP.

The scope of the spread depends on how successful interventions are in the state at large to keep COVID-19 from coming into prisons and jails. It will also depend on conditions within the jails, which has Rosen and others “very concerned.”

“I don’t think that those will be isolated cases,” Rosen wrote to CPP. “As we’re seeing across the country, I think we can expect a growing number of cases in the prison system.”

Rosen is one of several public health experts and medical professionals advocating for the release of prisoners with low-level offenses in light of the COVID-19 pandemic.

Rosen, who works with the Department of Public Safety and county jails across the state to improve health care to people who are incarcerated, said it is not too late “to release people with low criminogenic risk.”

This would do two things. First, releasing people would reduce the prison population and make it easier to achieve social distancing inside, something that is currently impossible. That would, in theory, decrease the rate of transmission of COVID-19.

Second, prioritizing the release of the elderly and the infirm would help protect people most at risk of serious medical complications, including death, from getting sick with COVID-19.

“Because of the age composition of the prison population – the largest number of hospitalizations and deaths will come from those aged less than 65 years,” Rosen wrote to CPP.  “So while it makes sense to prioritize older people (for release), that shouldn’t be done to the exclusion of younger people.”

The governor, legislators and district attorneys, who each have some authority to address release, have yet to act. The governor has not called the legislature back into session, which is set to start on April 28, or exercised his authority of clemency.

Though nonprofit agencies like the N.C. Justice Center and Prisoner Legal Services have provided lists of nonviolent offenders over 60 years old and near the end of their sentences to district attorneys across the state, no district attorney office has decided to request early release for anybody from prison.

A matter of time

“There is not a point when it’s too late from a medical standpoint, but it may be from a housing and health care follow-up perspective,” Ashkin wrote to CPP.

Now that COVID-19 is confirmed to be in at least one state prison, releasing people without careful consideration could spread the disease around the state. Since many people who are released do not have a place to go and shelters are not currently accepting new people, discharge plans should also provide housing, Ashkin wrote.

Further complicating matters, if there are infections in a facility, a discharge plan will be needed that includes an option for a 14-day quarantine, such as housing in a hotel room. This added requirement will make releasing people from prison more difficult as the disease spreads to more facilities.

Ashkin heads a program that connects recently incarcerated people to health care and is working with several state agencies to connect people being released to medical resources.

“However, a surge in releases would overwhelm an already overburdened safety net system that is struggling financially, and most people would be uninsured, further exacerbating financial strains that community health centers face,” Ashkin wrote.

Even in light of these barriers, Ashkin maintains that release is the best public health option.

Inside the prison walls

The person at Caledonia Correctional Complex who tested positive for COVID-19 was housed in a prison dormitory. The Department of Public Safety does not release population numbers due to safety concerns, it told CPP.

Even without knowing those numbers, social distancing in a prison dormitory is all but impossible.

Carl McMillian, who is incarcerated at Carteret Correctional Center, also lives in a dormitory unit. Beds are 36 inches apart, he told CPP.

“We go to the cafeteria and in the morning we stand in this long line, all of us in a line bumper to bumper behind each other,” McMillian said.

“When I say that, folks are at least 2 inches apart at all times. You got people coughing in line.”

Every prison is different in its physical layout and in its administration, even when it looks similar on paper to another prison.

Caledonia Correctional Complex, where the COVID-19 case was confirmed, was also a “work camp,” where people leave the prison during the day to work in the community and return at night.

This kind of work, in addition to work done behind the walls, helps people better reenter society at the end of their sentence, according to the Department of Public Safety. Work-release programs were closed down March 24.

If he was trusted to leave the facility to work, McMillian asked, why can’t he be trusted to go home? He is sentenced for a nonviolent felony for drug possession on school property and is scheduled to be released in August.

Almost everyone at his facility is in a similar situation, looking at release dates within a year, according to McMillian. He has heard increased talk about wanting to get out, like, “Man, I’m ready to do anything to try to get up out here,” he said.

“I’ve done heard statements like that,” McMillian said. “You can tell that everybody’s got a lot of anxiety and plus on top of that they’ve canceled all the visits. That’s all people can really think about is the virus because it’s on the TV all day.”

Visits, like work release, were canceled to try to limit the chances the virus made it inside the prison.

McMillian is worried because it is impossible for him to stay away from people, he said. He is washing his hands up to seven times a day, he said, and that is all correctional staff have told him and other people housed in the prison to do.

McMillian, who will return home to his wife, has three children. His father lives nearby, and his wife, Rhonda McMillian, takes care of her father, who has a long-standing lung illness, she told CPP.

“I’m coming home and don’t know what I’m bringing home,” Carl McMillian said. “I don’t know what might happen to me as long as I’m sitting here and not moving out of this place right now. That’s what my biggest scare is right now, is bringing something home to my wife.”

Rhonda McMillian has called the governor’s office, news media outlets, the judge who sentenced her husband and legal groups around the state looking for a way to get her husband out of prison before COVID-19 gets to him.

She told CPP that her husband, who is in his mid-40s and is too young for most conversations around who would get early release, has preexisting health conditions that could put him at increased risk if he got sick.

“I’m pleading for them to do something,” Carl McMillian said.

“That’s all I’m asking. Give us a chance of at least going home in the next six months or under or something. At least give us a fighting chance because we all did most of our time.”