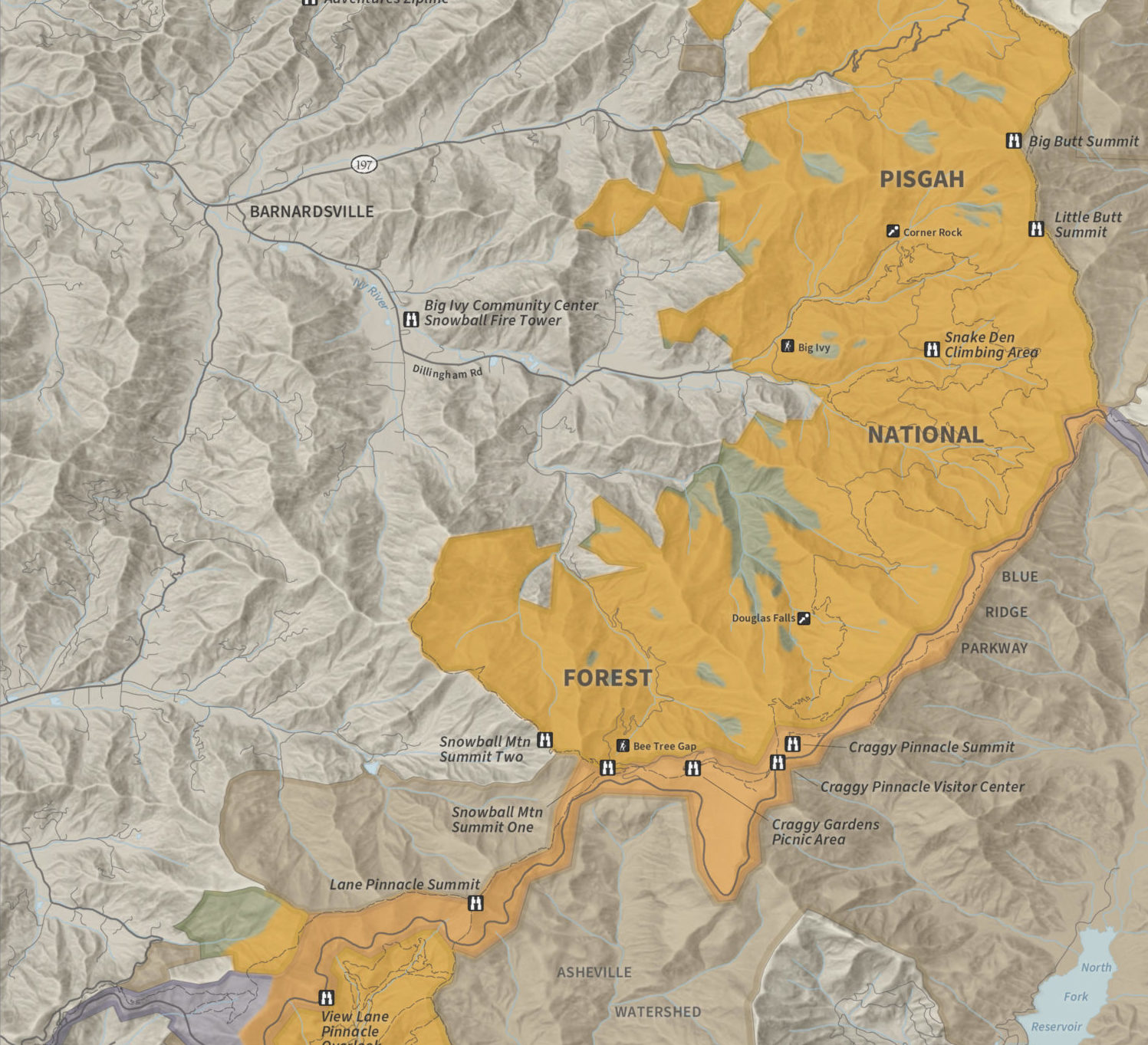 Map shows a portion of the proposed protected 16,000 acres within the Pisgah National Forest, located northeast of Asheville and west of Mount Mitchell. Map courtesy of the Southern Environmental Law Center

The proposal requests broader, more lasting protections than the U.S. Forest Service’s Proposed Land Management Plan for Pisgah and Nantahala national forests, which was released Feb. 7. The draft plan, scheduled to be finalized in 2021, will oversee the management of the region’s two national forests for the next two decades.

The Buncombe proposal would expand protection in Shope’s Creek, the Big Ivy watershed near Barnardsville and portions of the Craggy Mountains in northern Buncombe County.

Advocates of the proposal, which include the groups I Heart Pisgah, the N.C. Sierra Club, The Wilderness Society, MountainTrue and the Southern Environmental Law Center, say the area is one of the wildest and most ecologically extraordinary portions of Pisgah National Forest.

In February, the groups proposed to the Forest Service that an area be protected as the Craggy Mountain Wilderness and National Scenic Area, encompassing 16,000 acres, and its boundaries include 8,693 acres recommended as federal wilderness.

The Blue Ridge Parkway spans the crest of the Craggy Mountains northeast of Asheville. According to a viewshed analysis conducted by the SELC, 92% of the land within the proposed NSA is visible from just a handful of scenic overlooks on the parkway.

“Having a national scenic area 15 miles from Asheville would be an exciting development for the entire region and protect the values people have for this area,” said Will Harlan, an organizer of I Heart Pisgah, a coalition of over 100 local businesses and organizations.

“The area has a great mountain biking trail network, hundreds of acres of old growth, clean water, rare species and is arguably one of the most valued viewsheds in the nation.”

In 1984, Congress passed legislation that created the 2,380-acre Craggy Mountain Wilderness Study Area. But legislation to add the area to the National Wilderness Protection System failed to pass the U.S. Senate in 1990.

Nevertheless, the WSA designation and land recommended for wilderness in the land management plan require that the Forest Service manage the land as federal wilderness, which places restrictions on use, such as mountain biking, road building and various timber harvesting techniques.

The proposed land management plan released by the Forest Service in February recognized acreage within the Big Ivy watershed and Craggy Mountains as a “special interest area,” a Forest Service designation that recognizes places within the two Western North Carolina national forests with significant public or ecological value.

Plans for acres not going  backwards

However, Evans said the plan alternatives provide only short-term protections for some portions of the area that would not outlast the future forest plan and would potentially leave ecologically sensitive areas and viewsheds open to timber harvests and road construction.

“The public spoke out, and the Forest Service is considering expanding protection, but the public is not just saying they want more land protected,” he said. “They want more land permanently protected. This proposal would ensure that those values will all be available for future generations and would formally recognize the extraordinary value of the Craggies’ scenic and ecological integrity.”

Additions to the National Wilderness Preservation System and a national scenic area designation are a higher level of land protection that requires a recommendation from the Forest Service in the future forest plan and, ultimately, an act of Congress and signature of the president.

The proposal, Harlan said, is based on the public comments of thousands of people who wish to see the area protected forever.

”We are building on that momentum to take it farther than what the Forest Service has recommended,” he said.

During the planning process, federal land protection has been a divisive topic. More than a dozen rural counties have passed resolutions opposing any additions to the wilderness system within their borders.

David Whitmire of Transylvania County represents Western North Carolina sportsmen and women as the chair of the Fish and Wildlife Conservation Council, a group that advocates for hunter access and restoration of wildlife habitat to counter declining game population.

“We have not endorsed or protested any additional wilderness areas brought forth in the draft plan,” Whitmire told CPP. “It’s our belief that (each) county’s social voice is spoken through its local elected officials.  It is FWCC’s position that we would support the wishes of local counties when it comes down to wilderness areas.”

While he did not have a position on the national scenic area proposal, his hope is that hunters in Buncombe County will continue to speak to county commissioners about their public land needs.

While the proposal would expand the acres of proposed wilderness, Harlan said those acres would include steep and inaccessible areas and headwaters. Additionally, the national scenic area designation would not impact current uses, such as the existing trail system and the ability to restore ecologically damaged forest through timber harvesting or prescribed fire, for example. Land recommended for wilderness within the forest plan would have user and management limitations.

“The scenic designation is the most flexible and gives the Forest Service all of their tools to manage the forests,” Harlan said.

N.C. Rep. John Ager, D-Buncombe, whose district includes Big Ivy, told CPP in February that he would support more protection as long as forests could still be managed and allow hunting.

“I am sympathetic to my constituents, and I heard loud and clear one of the goals of the forest plan is a resilient forest,” Ager said. “If the plan is to make the Big Ivy more resilient and more healthy, I would be all in favor to make it as healthy as possible.”

However, a wilderness bill in Congress requires support from the local congressional delegate. Former U.S. Rep. Mark Meadows, R-Sapphire, resigned earlier this year to take a position with the White House. The governor has not yet announced plans to fill the seat for the remainder of Meadows’ term.

Voters are due to elect a new representative in November. The 11th Congressional District has been substantially redrawn to include a much larger portion of liberal-leaning Buncombe County than it did between 2012 and 2018, when the district repeatedly elected the very conservative Meadows.

Democrat Moe Davis won his party’s primary for the seat and will face the winner of a second primary between the top two Republican finishers, Madison Cawthorn and Lynda Bennett. The runoff is currently scheduled for June but could be affected by the ongoing coronavirus pandemic.

The pandemic also forced the delay of public meetings related to a required 90-day public comment period for the proposed land management plan that began Feb. 14. The Forest Service said it will extend the comment period.