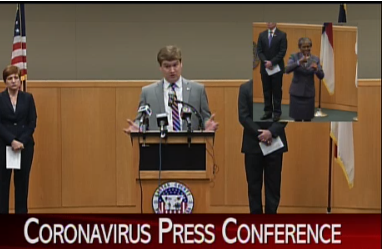 A Gaston County commissioner encouraged businesses in his county to open at 5 p.m. Wednesday, in defiance of a state stay-at-home order that was intended to prevent the spread of the new coronavirus.

“Truly the cure may be worse than the disease for a great majority of our citizens,” County Commissioner Tracy Philbeck said, echoing words President Donald Trump has uttered at press conferences and tweeted throughout the COVID-19 pandemic.

Philbeck and other commissioners signed an order Wednesday saying Gaston County is ready to open for business “once the governor lifts the statewide restrictions that are still binding upon the individuals and businesses throughout North Carolina.”

But Philbeck was quick to contradict the official line, saying as a commissioner he has to make decisions “for the greatest number of people.” “If we continue to go down this path,” he said, referring to the governor’s stay-at-home order, “it will literally be a point of no return.”

To be clear, when Philbeck encourages people to break the stay at home order, he asks them to commit a crime because local county commissioners do not have the power to nullify a governor’s executive order.

“All restrictions and prohibitions imposed under a gubernatorial executive order remain in effect and are enforceable within that jurisdiction,” said Norma Houston, a lecturer in public law and government at the UNC School of Government.

That the coronavirus has caused a massive disruption in everyone’s lives is not in dispute.

Gov. Roy Cooper closed K-12 schools in March, and they will not open this school year. Bars and restaurants closed to in-person service also, and the governor’s stay-at-home order began just one month ago.

That closures have battered the economy is unquestioned. On Tuesday, the Department of Employment Security said it had paid nearly 370,000 North Carolinians more than $960 million in unemployment benefits. Since March 15, more than 900,000 people have filed new claims for unemployment, the vast majority of whom say they lost their jobs due to the pandemic.

During a video chat later in the day, Philbeck stressed that the county’s legal stance is that Cooper’s order is the law of the land. But Philbeck quickly dispensed with the legalese.

“If you open up your nail salon, my wife would probably come,” Philbeck said. “If you open up a restaurant, I will definitely come and eat.” As long as people observe “social distancing, strict sanitation and hygiene” a business should be able to open, according to the commissioner.

“If you see a reporter say it’s confusing, it is absolutely fake news,” Philbeck told his Facebook live audience.

Having heard Philbeck’s statements from earlier in the day, a restaurant and a tattoo parlor announced on social media a 5:30 p.m. opening. Hours later, they reversed their earlier decision to open.

Ink Link Tattoos of Gastonia posted, “As soon as we can open, we will. Sorry for any confusion.”

“Gaston County government will continue to follow all state laws, including Gov. Cooper’s executive order,” the Gaston County statement reads. “At no point would county leadership ask its staff or county residents to break the law.”

Anyone breaking the stay-at-home order can be charged with a Class 2 misdemeanor, though police most frequently choose to educate residents about the emergency order.

“We are in a crisis, and I think confusion is really, really damaging in a crisis,” Cohen said. “Throughout the state of North Carolina, the governor’s executive order is still in place.”

Gaston County is near Charlotte.

“We have relied on local law enforcement to enforce the stay-at-home order,” said Ford Porter, the governor’s spokesman. “We expect people will continue to comply with it and that business owners will continue to value the health and safety of their customers and employees by following the order.”

After his statements on the stay-at-home order, the county commissioner went on an anti-government screed.

“People, you are a lot smarter than us,” Philbeck said. “We are not the bearers of knowledge. Government is not.”

To date, at least 9,948 North Carolinians have contracted the virus that causes COVID-19, and 354 have died. Of those, 137 have been Gaston County residents, three of whom have died.

More than half of North Carolina’s deaths are occurring in congregate care settings like nursing homes. Nationwide, more than a million people have tested positive for the disease, with more than 60,000 deaths, according to Johns Hopkins University & Medicine.

People with underlying health conditions or are age 65 or older seem to be most susceptible for serious complications or death from COVID-19, though some reports show younger people dying from strokes or having mysterious blood clotting complications.

As for Philbeck, he said he plans to attend his church on Sunday.

Gaston County mayors not buying it

Philbeck postulated earlier in the day that “most municipalities” would agree with him.

They did not. By early evening, a statement signed by all 12 mayors in Gaston County said, “All businesses and residents of our cities and Gaston County are required to comply with the orders issued by Gov. Roy Cooper.”