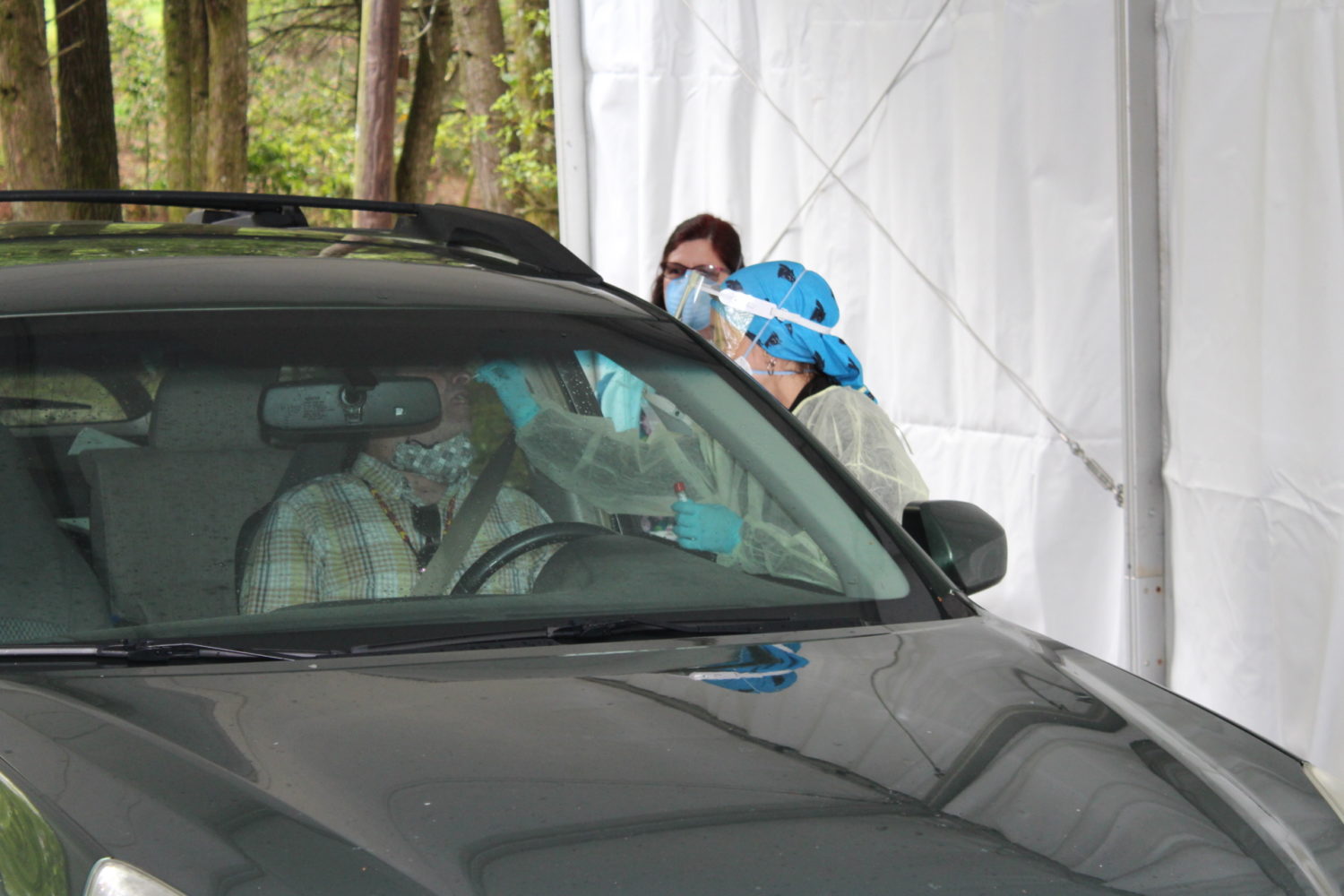 Jade Teesateskie, who become the first case of a Graham County resident to test positive for the new coronavirus, was tested by the Eastern Band of Cherokee Indians at Snowbird. Seen here, the tribe conducts testing within the Eastern Band’s territory in the Qualla Boundary. Joseph Martin / Carolina Public Press.

A Graham County resident and member of the Eastern Band of Cherokee Indians received bad news from the results of her COVID-19 test, and she is left baffled as to how she could have contracted the disease caused by the new coronavirus.

Jade Teesateskie is the first positive case in a county that was 97th out of 100 in the state to report the virus.

The 26-year-old Teesateskie had no symptoms at the time of the test and did not show symptoms during her quarantine, which ended Tuesday.

“The first thought in my mind was, ‘Oh God, I could’ve given it to somebody,’” she said.

Teesateskie came forward to the public on her Facebook page on April 27.

“As I’m sure most of you already know — let’s be honest, ain’t nothing a secret in Robbinsville — there has been a confirmed case of COVID-19 in Graham County,” she said. “I am this positive case. At the risk of having some of you attack me, I am posting this because it’s super-important to get tested! I have had no symptoms and at the request of work got tested. I’m asking not only for those I’ve come into contact with but for everyone to get tested please!”

While Teesateskie is a tribal member and was tested at the tribe’s Snowbird Health Clinic, her residence is under the county’s jurisdiction.

“The tribe has been an excellent partner to have,” said Graham County Health Director Beth Booth.

Vickie Bradley, tribal secretary of public health and human services, said they work closely with the health departments of all the counties where the tribe has trust land, and with positive results, they contact the counties immediately.

Both Graham County and the tribe have been aggressive in trying to stop the spread of the virus through their communities. Both had law enforcement stationed at main entrances to restrict entry to residents or others who had legitimate reasons to go there. Both attribute the measures to keeping the number of cases low.

“It’s flattened the curve, and that’s the point,” Booth said. “The county had taken some pretty aggressive measures early on, which had helped.”

While these measures have been successful in slowing the spread to their communities, they haven’t stopped it. In addition to Graham County’s two cases, the tribe, as of Wednesday, has nine positive cases among residents.

Teesateskie doesn’t know how she caught COVID-19. “I wish I knew,” she said.

Teesateskie’s experiences were a common theme among all going through the isolation, such as cabin fever. But with a positive test result, hers also comes with a lot of unknowns and anxiety.

Most of the messages and communications she’s had with the community have been positive, and she posted an emotional video thanking all for the prayers and kind words.

“I truly am blessed to live in this community,” she said.

She felt letting people know was the right thing to do.

“I was heartbroken, and I was shocked,” she said. “My concern was passing it on, knowingly or unknowingly, to people who are susceptible.”

Teesateskie urges all to be careful. “In my case, it has no symptoms. If you have the opportunity to get tested, go get tested,” she said.