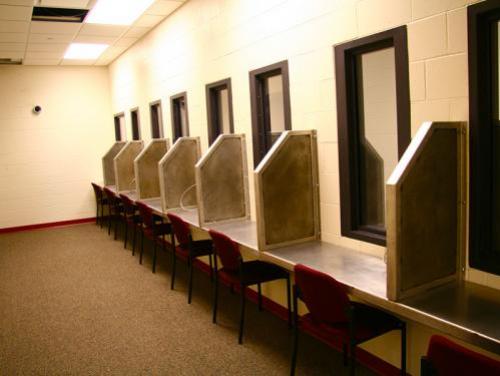 An empty visitation area at a North Carolina prison. A judge has dismissed a lawsuit seeking the release of many prisoners due to the spread of COVID-19. Photo courtesy of the NC Department of Public Safety

A Wake County Superior Court judge has denied an emergency lawsuit filed by civil rights groups that would have forced the state to release people from prison.

The civil lawsuit alleged that prison conditions, exacerbated by the COVID-19 pandemic, were unconstitutional because they put people at risk of illness and death.

The plaintiffs argued that because social distancing is not possible inside prisons, the state’s only remedy to protect people from illness is to let them out.

After oral arguments on April 28, Judge Vinston Rozier Jr. ordered the state to provide extensive records on how it was responding to COVID-19 outbreaks in its prisons, including information about how prisons were limiting the spread of the disease.

After considering “the submissions of the parties, matters of record, and the passionate arguments of counsel,” Rozier denied the motion, he wrote in his order late Tuesday.

The Department of Public Safety, a defendant in the lawsuit and the governmental agency responsible for running the state’s prisons, argued that the state has mounted an extensive response to the virus and therefore the court did not need to take any action.

“The judge’s order, as well as the information DPS provided in response to the lawsuit, speaks for itself,” DPS spokesman John Bull wrote to CPP on Wednesday. “The Division of Prisons will continue working diligently to keep our staff and those in our custody safe during this pandemic.”

So far, five people have died from COVID-19, the disease caused by the new coronavirus, while in state custody. The state treasurer’s office announced that it had secured 20,000 COVID-19 tests, enough to test every DPS staff person, yet DPS declined the tests.

North Carolina is one of six states that is neither collecting nor publicly sharing testing information for prison staff, according to the COVID Prison Project tracker.

The coalition of civil rights groups that brought the case vowed that the fight was not over, though the plaintiffs have not yet announced the next steps, which could include an appeal to a higher court.

“The fact remains that what’s unfolding in our state prisons is a humanitarian disaster that endangers the lives of thousands of incarcerated people, prison staff and our entire community,” said Susan Pollitt, supervising attorney at Disability Rights North Carolina, which was named as a plaintiff in the case and was a member of the coalition that filed the suit.

On Tuesday, DPS announced that several hundred people across the Neuse, Bertie, Caledonia, Pasquotank and the N.C. Correctional Institution for Women prisons were “presumed to be recovered” from COVID-19 due to the time that has passed since they were tested for the disease.

The announcement that everyone was recovered was also made Wednesday in at least one of the dorms at the N.C. Correctional Institution for Women, according to Natasha Purvis, who is incarcerated there on a five-year sentence for low-level drug offenses.

“We have women here that are still struggling with symptoms, coughs, headaches, really tired-feeling, and nobody has seen a doctor at all,” Purvis said.

Her dorm has been quarantined for 14 days, she said, which is in accordance with the state Department of Health and Human Services guidelines for the presumed recovery.

In Carteret Correctional Institution, Carl McMillian, who is also incarcerated for low-level drug charges, said the state’s measures to prevent the spread of COVID-19 are hardly being followed.

The prison set down markers on the ground to keep people apart while they line up for meals or for medicine, but the markers are ignored, he said.

The state told the court that it has issued more than one face mask per person, though McMillian said inmates have only been issued a single mask of thin T-shirt material. Unless a visitor is on campus or they are in the prison yard where they can be seen from the highway, prisoners are not told to wear the face mask, McMillian said.

In the dorm, where beds are spaced a foot-and-a-half apart, inmates have not been told to sleep head-to-toe, as has been enforced in other prisons.

No reported cases of COVID-19 in Carteret Correctional Institution have been reported, though McMillian is wary of the several men in the 64-person dorm who have persistent coughs. McMillian worries for his life, as he has a number of conditions that could increase his chance of death if he becomes sick with COVID-19.

“I ain’t come to get a death sentence, ’cause I don’t know if this thing will get me,” McMillan said. “I got 84 days left.” He is scheduled to be released on Aug. 7.

In light of the COVID-19 pandemic, DPS identified about 650 people who qualify for early release or for a program to finish serving their sentences outside prison.

That is about 2% of the prison population.

McMillian said four people from his prison have been let out through that program, though he has not heard back yet about the requests for release that he and his wife have filed.