“Finally, in North Carolina, no means no,” Cooper told a crowd gathered in Greensboro.

“Justice will not be denied just because it’s delayed. Finally, in North Carolina, people are required to speak up for sexually abused children.”

The ceremonial bill signing was held under cloudy skies at Family Service of the Piedmont, a nonprofit organization where domestic violence survivors and abused children can get help. 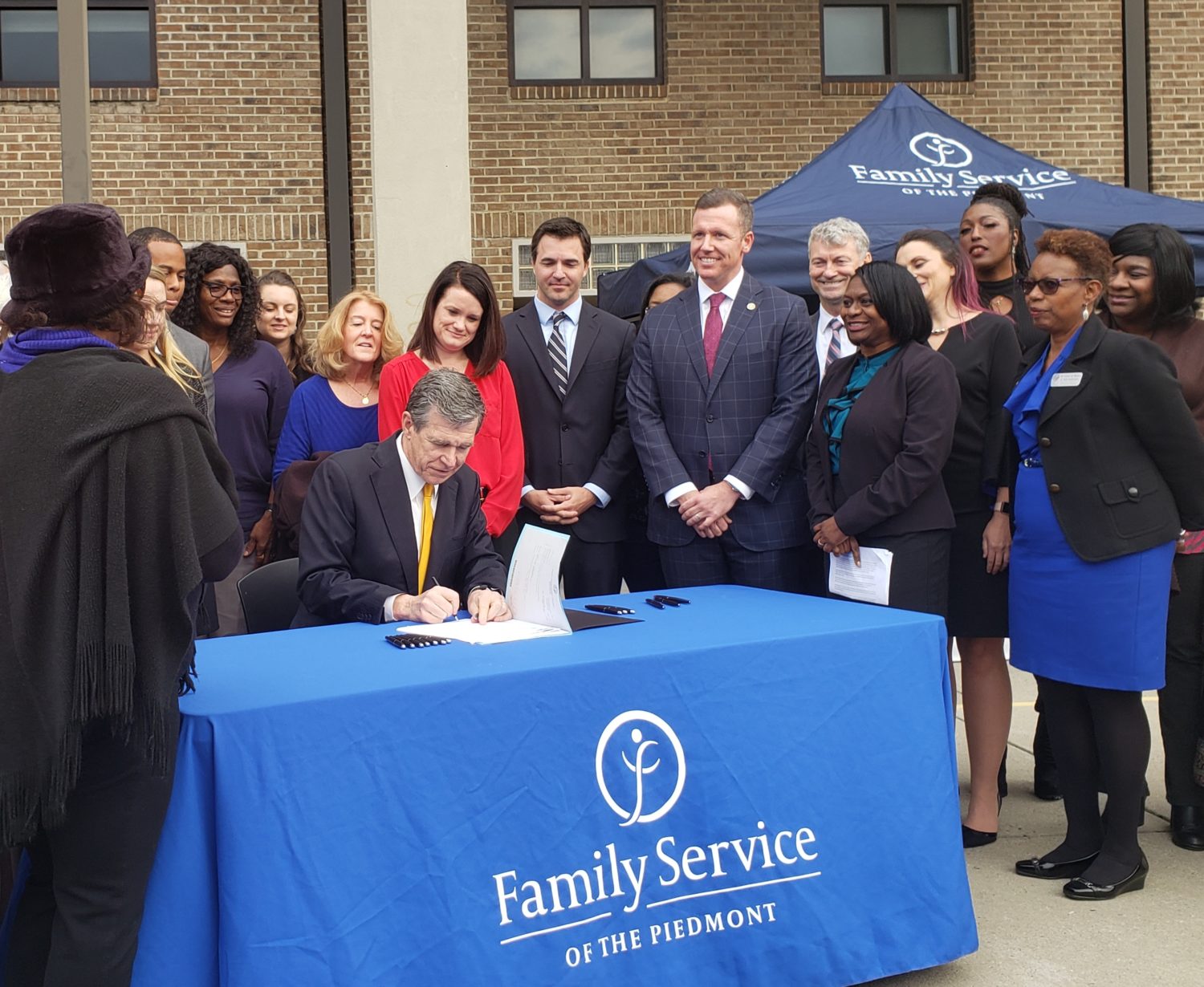 Gov. Roy Cooper signs a package of reforms to NC sexual assault laws Thursday afternoon, during a visit to a domestic violence shelter in Greensboro, as supporters of the legislation look on. Kate Martin / Carolina Public Press

An investigative series called “Seeking Conviction” by Carolina Public Press and nearly a dozen media partners earlier this year highlighted problems with the state’s consent laws. Reporting showed that fewer than 1 in 4 people charged with a sexual assault are eventually convicted of that or a lesser related crime within a 4 ½-year period.

Two key provisions in the legislation Cooper signed Thursday will now allow North Carolina prosecutors to charge and possibly convict people of sexual assault who continue having sex with a partner after being asked to stop.

Another part of the law says it’s now considered a crime to have sex with a person who is incapacitated through his or her own use of alcohol or drugs.

North Carolina was the only state in the country where continued sex after one partner revoked consent was not considered a crime.

“I think the publicity around this legislation will help, because it’s going to send a message to people who may be predators that North Carolina law is changing and you better watch out,” Cooper said.

“If someone tells you no, at any point, it’s not OK and you are violating the law.”

For decades, members of law enforcement, prosecutors and advocates have had to break the bad news to victims that their assailant will not be charged with a crime because of the circumstances of their assault.

It’s a conversation Erica Blackwood has had many times as a sexual assault community outreach advocate at Family Service of the Piedmont. In fact, she said she’s currently speaking with a young woman whose assault falls into the very loophole that Gov. Cooper’s signature closed on Thursday.

“It’s very hard to explain, and she said she’s getting some pushback from law enforcement,” Blackwood said.

The legislation passed the state House and Senate by unanimous vote on Oct. 31. Most provisions in the legislation take effect Dec. 1 this year.

The bill also makes tampering with someone’s drink a crime even if nothing bad happens afterward.

Last year, Leah McGuirk was at a Charlotte bar with friends when her vision blurred and she started to stumble. Her friends thought she was having a seizure.

“Had it not been for the fast action of my friends, I could easily have been sexually assaulted,” she told a state House committee earlier this year.

But because nothing happened to her after her drink was drugged, police told her no crime had been committed.

“I wasn’t technically a victim because I had not been sexually or physically assaulted afterward,” she said in April. “It could have very easily killed me, had the predator given the incorrect dosage.”

Tampering with someone’s drink is now considered a felony.

For a while it seemed the consent legislation was stalled in the General Assembly. Though House Bill 393, which tackled the state’s incapacitation loophole, garnered unanimous support in April, it languished in the Senate without a hearing.

Senate Bill 563, which sought to make continued sex after revocation of consent a crime, never got a hearing in the Senate. That bill’s co-sponsor, Sen. Jeff Jackson, D-Mecklenburg, had proposed the legislation three times before without success. He declared his bill dead in August.

But cryptic comments from other legislators indicated the bill was not dead, and that much more was occurring behind the scenes.

Around that time, the time details of another bill, Senate Bill 199, were hashed out privately in a conference committee. The bipartisan group of legislators from the House and Senate included state Sen. Danny Britt Jr., R-Robeson, but not Jackson.

Senate Bill 199 initially didn’t include revocation of consent, but Britt was co-chairman of the conference committee and he said he made it happen.

Britt, who has both defended and prosecuted felony criminal cases, said the new laws will help prosecution of those charged with sexually violent crimes.

“It’s very important legislation,” Britt said. “We do not need any loopholes (in the state’s sexual assault laws).”

A major part of the legislation increases the statute of limitations for civil actions by child abuse victims against their perpetrators from age 21 to age 28. Several states have already increased their statutes of limitations in this regard, a move that elsewhere has been opposed by Boy Scouts of America and the Catholic Church.

Attorney General Josh Stein said he plans to push for age 40 in future sessions of the General Assembly. There is also a two-year “lookback” period after a perpetrator is convicted of a felony sex offense against a child, where at any age the victim may sue his or her assailant.

Carolina Public Press attempted to locate the woman at the center of the 40-year-old state Supreme Court precedent regarding revocation of consent, but was unsuccessful. Over the years, North Carolina Coalition Against Sexual Assault has also tried to find her, to no avail.

When asked what he would tell the woman in the case, who was told that her revocation of consent and her assailant’s acts against her were not a crime, Britt paused.

“It was a travesty that she did not get the justice that she deserved,” Britt said.

“But with this change in the law, hopefully others will get the justice that she should have gotten so many years ago.”

Cooper said he would tell her that what happened to her was “deeply wrong and that decision was wrong.”

“Her case helped make the law right in North Carolina and across the country,” Cooper said. “We cannot tolerate that in our society.”

“No ought to mean no at any time,” Cooper said after he signed the bill. “For women not to be able to revoke consent can mean a very dangerous situation, and can leave a loophole in the law where predators can go free.