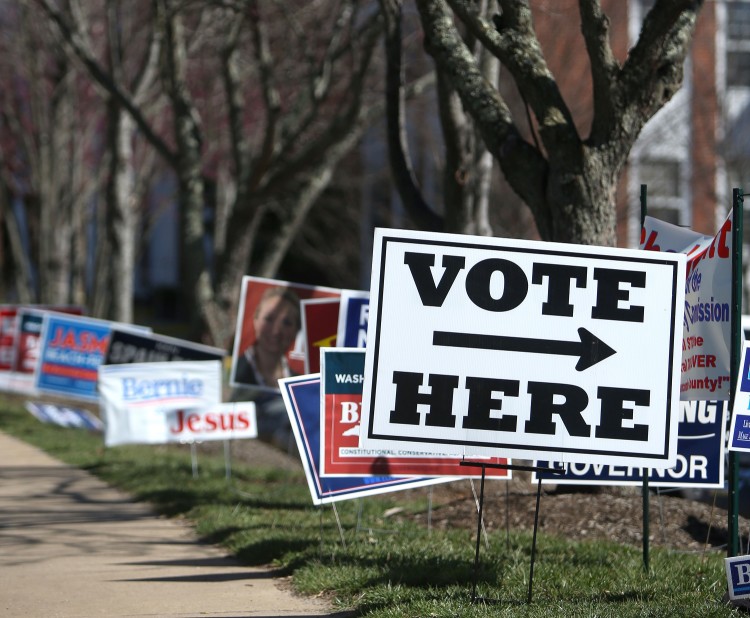 Election signs on display in front of the West Asheville Public Library ahead of the March 2016 primary election. Candidate filing for the 2020 election for most offices begins today. Colby Rabon / Carolina Public Press

Editor’s Note: This article was initially published at 5:30 a.m. Dec. 2. That afternoon, the three-judge panel reviewing new North Carolina congressional districts approved the map legislators had redrawn in November and lifted the hold on filing for congressional candidates. This article reflects the situation prior to that ruling.

Political year 2020 gets underway in North Carolina today, as the filing period opens for candidates seeking most local, state and federal offices.

From noon today until noon Dec. 20, those wanting to appear on the ballot in 2020 can file with their local board of elections office or the state board in Raleigh, depending on which seat they are seeking. It’s this filing, rather than any announcements at party events or in the news media, that determines who shows up on next year’s ballot.

However, redistricting challenges have created a delay in filing for congressional candidates and a late change for Mecklenburg judicial candidates.

The panel has placed a hold on filing for the U.S. House of Representatives while the panel reviews recently redrawn congressional maps to determine whether elections should move forward using those districts. It appears likely that the primary elections for these races will be delayed as a result.

The same three-judge panel issued a late change for Mecklenburg County judicial races on Wednesday, while the panel reviews districts drawn by the Republican majority in the North Carolina legislature to determine whether they are unfairly partisan.

Because the judicial panel does not expect to resolve the Mecklenburg County dispute in time for the 2020 election cycle, the panel has ordered that 2020 elections for Mecklenburg judges be conducted at large rather than by districts.

Among the candidates who will file this month with the N.C. Board of Elections are those for U.S. Senate, governor, lieutenant governor, Council of State, N.C. Supreme Court justice, Court of Appeals judge, District Court judge, Superior Court judge and district attorney.

Candidates who can file with their county elections office include those for N.C. Senate, N.C. House of Representatives and county commissioners.

Because different term lengths, offices and election cycles exist in counties and municipalities for various seats, such as school board, minor county offices and various municipal offices, some candidates for those seats may need to file with their county election boards during the December filing window, but others will have a later filing window. Many local offices, such as sheriff, will not be on the ballot for the 2020 election cycle.

Those interested in seeking these offices or finding out who is running should check with their local county election board offices.

Candidates who file but change their minds about running or decide they would rather file for a different office may withdraw by Dec. 17. North Carolina does not allow a candidate to run for more than one office at the same time.

Primary elections in North Carolina typically take place in May but have been moved to March 3 to ensure the state’s presidential primary is in time to be relevant nationally.