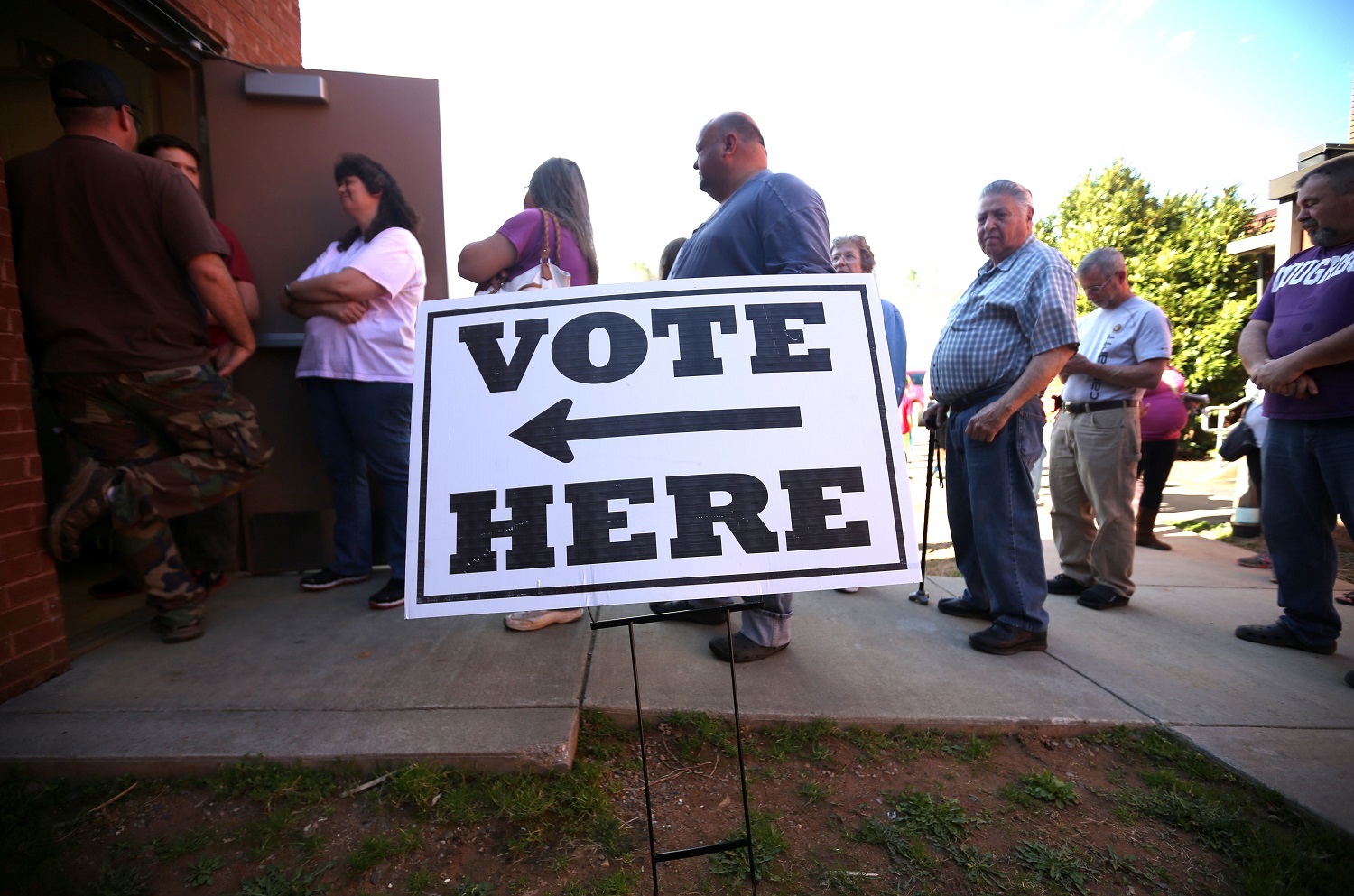 Buncombe County voters wait in line to cast primary ballots outside Leicester Elementary School on March 15, 2016. Candidate filing for the 2020 primary elections in North Carolina has been open since Dec. 2 and will end at noon Dec. 20. Colby Rabon / Carolina Public Press

With legal challenges to the state’s congressional and legislative maps closed, candidate filing for North Carolina’s 2020 election cycle opened last week, setting in motion what promises to be a contentious year of campaigns up and down the ballot.

The three-week filing period opened Dec. 2, after an unusually quick resolution to the latest legal fight over the state’s congressional maps.

Since this is a presidential election year, North Carolina’s primary election moves from early May to Super Tuesday, March 3, during which 14 other states will also hold primaries. Filing ends at noon Dec. 20, with early voting scheduled to begin Feb. 13.

End to decade of district litigation

The filing season marks the end, for now, of the nearly decadelong series of legal battles over state legislative and congressional districts.

In a unanimous ruling, a three-judge panel in Wake County Superior Court overseeing the challenge to the state’s congressional districts authorized the use of new maps approved by the General Assembly last month and lifted an earlier order preventing the election from going forward.

In announcing the decision, Judge Paul Ridgeway said the case would likely cause a significant delay in the election schedule. “It’s time for the citizens to vote,” he said.

“Now that a unanimous, bipartisan court has denied the plaintiffs’ last-minute challenge to the 2019 congressional map and the candidate filing period is open and underway, we can finally put this decade of relentless litigation behind us.”

Hours later, attorneys for plaintiffs in the case announced that although disappointed in the outcome, they would not pursue an appeal given the election timeline.

Former U.S. Attorney General Eric Holder, chair of the National Democratic Redistricting Committee, said the new maps represented an improvement, but voters still deserved better. The committee’s affiliate, the National Redistricting Foundation, has been working with plaintiffs in the case.

A similar sequence of events took place earlier in November, when plaintiffs dropped their challenge to state legislative districts after the court approved a redraw by the legislature.

In both cases, the new districts appear to undo some but not all of the partisanship of previous iterations.

Shape of congressional delegation to come

A recent Sabato’s Crystal Ball analysis of the congressional districts by the University of Virginia Center of Politics agreed with the consensus view that the shift in congressional races would likely yield a two-seat pick up for Democrats but noted that any changes beyond that are unlikely given the way the districts were drawn.

“Though the new map is altogether more reflective of the state in terms of its expected delegation, North Carolina is a competitive battleground state; in that regard, none of the new districts mirror the state’s purple demeanor.”

So far, as a result of the new districts, one incumbent has announced his retirement, and nine have filed to run in the new districts. On Friday, 2nd Congressional District GOP Rep. George Holding, who ousted Rep. Renee Ellmers in the 2016 primary, announced he would not run again.

In his statement, Holding held open the possibility that one day he would “return to public office.”

No candidates have filed yet in the redrawn 2nd Congressional District, which is now entirely within the borders of Wake County, but Deborah Ross, former state representative and 2016 Senate candidate, has said she intends to run.

Last month, Meadows, who is close to President Donald Trump, was mentioned by the Washington Examiner as a potential replacement for White House acting Chief of Staff Mick Mulvaney, the second year in a row for the rumor.

Last week, The Hill reported that Walker has been polling to determine his chances in a primary against either Budd or U.S. Sen. Thom Tillis, who is currently without a primary challenger after Garland Tucker’s announcement last week that he would drop out of the race.

With two weeks to go for filing, there are 13 seats in the state Senate and 28 seats in the House that will be contested in the fall.

Those numbers are bound to grow, although duplicating the competitiveness of the 2018 election cycle, in which all but one of the 170 General Assembly seats were contested, could be difficult.

Several primaries are already contested, spurred mainly by the number of open seats. Twelve House members and 10 senators are either retiring or seeking other offices.

One former member of the WNC delegation is launching an attempted comeback. Former Rep. Tim Moffitt, R-Buncombe, who was ousted in 2014, has filed in the GOP primary to replace McGrady in House District 117.

Other significant retirements this year include Senate Majority Leader Harry Brown, R-Onslow, who is in his eighth term, five-term Sen. Rick Gunn, R-Alamance, and six-term Sen. Floyd McKissick, D-Durham, who was recently appointed to the N.C. Utilities Commission.

Governor and Council of State filing

The field of candidates in both parties to replace Forest as lieutenant governor stands at five Democrats and five Republicans.

Also well-populated after the first week of filing is the Democratic primary to replace Johnson as superintendent with four candidates already in the running.