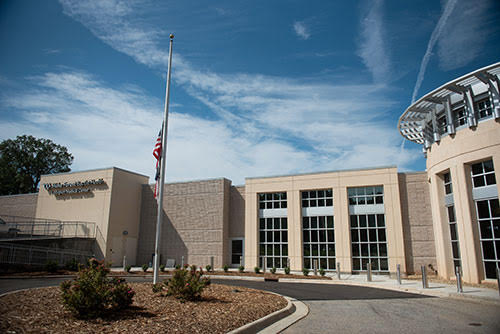 Wake Forest Baptist Health’s Lexington Medical Center in Davidson County has announced that it will end labor and delivery services later this year, part of a growing trend of these services being eliminated at rural North Carolina hospitals. Photo courtesy of Wake Forest Baptist Hospital

Lexington Medical Center announced that it plans to end its labor and delivery services by midyear, the latest in a string of hospitals throughout North Carolina to do so.

Wake Forest Baptist Health leaders announced the upcoming closure last week. Patients who arrive at the Lexington hospital after the unit closes will be transferred to Wake Forest Baptist Medical Center in Winston-Salem, roughly 30 minutes away.

“We never like to see services leave our border,” she told Carolina Public Press on Thursday.

Koontz said she learned the hospital delivered fewer than one baby per day and performed a cesarean section maybe every other month.

“They kind of get out of practice” if hospitals don’t have enough births or other procedures as hospitals in more populated areas might have, Koontz said.

In a news release, Julie Ann Freischlag, CEO of Wake Forest Baptist Health, said, “We hope those in the Lexington community understand that this was a difficult but necessary decision that will help us better meet the needs of people here in Davidson County.”

The Davidson County Health Department pays for prenatal appointments in Davidson County if patients fall below an income threshold and do not have insurance, Koontz said.

While disappointing, the closure at Lexington was not surprising, Koontz said.

“We track all of the vital records and statistics at our health department,” she said. “There are already a significant portion of our residents giving birth outside of our county, about 20%.”

For some residents, traveling to these larger cities was a shorter drive than to Thomasville in northern Davidson County, or Lexington, located near its center, she said. A large portion of the county is to the south of these cities, however, and travel to a larger city could take the better part of an hour, if not longer.

Davidson County includes several bedroom communities on the outskirts of the major cities in the Piedmont Triad region, Koontz said. Census information shows the county’s residents earn about 80% of the state’s median income of $53,855.

But those who live in Lexington’s city limits are far poorer, census figures show. The median household earns just $28,700, and a third of residents live below the federal poverty line — about double the state’s rate.

And while Davidson County as a whole is about 80% white, more than half of Lexington’s residents are people of color, with black people making up 30% of the total population.

Trends of labor and delivery closures

Of rural hospitals that close their labor and delivery services, many say it’s because fewer women give birth there.

Erlanger Western Carolina Hospital in Murphy, in the western end of the state, closed its labor and delivery services, as well as its obstetrics and gynecological services, last year.

CPP reported jointly with Huffpost in 2017 on the pattern of Mission Health gradually closing labor and delivery services at its rural mountain hospitals in Spruce Pine, Brevard and Franklin. Although Mission has since been acquired by for-profit HCA, at the time Mission was nonprofit, like Erlanger and Wake Forest Baptist.

State data shows women gave birth to 85 babies in the first nine months of last year — about a baby every three days. Several surrounding counties also lack labor and delivery services, and a pregnant woman from Murphy will have to travel more than an hour to find a hospital with such services.

Pregnancy-related deaths in the United States have climbed since they were first tracked in the late 1980s, according to the national Centers for Disease Control and Prevention. Maternal mortality is higher for black women than any other category, for reasons doctors and researchers don’t entirely understand.

At least one critic of Wake Forest Baptist Health’s retreat from Lexington sounded off on social media last week. Michelle Drew, an advanced practice nurse based in Maryland, called the move “sad” on social media.

Looking ahead in Lexington

Around two dozen workers from the Lexington hospital, mostly nurses involved in delivery services, will be looking for work elsewhere.

“Wake Forest Baptist is actively working with these highly experienced and valued team members to place them in open positions within the health system,” the press release says.