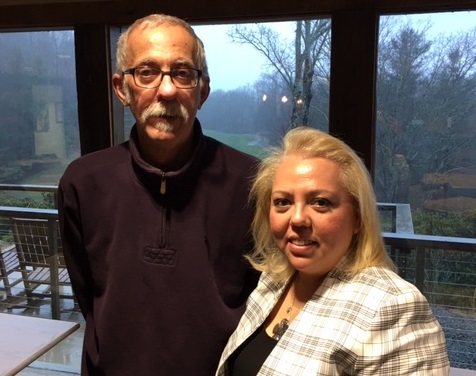 Francis Sconzo, left, is a cook at Connestee Falls residential community near Brevard, where Rocio Borghini is human resources manager. They, several of their colleagues and other residents of Transylvania County continue to ask why an outpatient fee has been applied by Mission Health to their primary care visits. Neil Cotiaux / Carolina Public Press

The “surprise hospital charge” outcry that has surfaced in different parts of the country has come to Western North Carolina, with bewildered patients of Mission Health looking for answers.

Since last fall, Mission Health patients have experienced a new charge on their bills after visits to a primary care office for an annual checkup, blood pressure check or some other routine matter.

When the bill for their visit arrives, there’s a new charge listed: an outpatient fee that can run $100 or more without the patient having set foot in one of Mission’s hospitals or having seen a specialist.

The fee, which some patients say Mission has never explained satisfactorily, affects individuals and families across the region. And in Transylvania County, voices of opposition are growing stronger.

Francis Sconzo, a cook at the residential community of Connestee Falls near Brevard, wants answers.

Before HCA Healthcare acquired Mission Health just over a year ago, “I would just pay my $35 copay and not get another bill,” Sconzo told Carolina Public Press last week.

But after a recent primary care visit, his bill showed him owing $107.20, the “Total Amount for Hospital Services,” payable to “Medical Associates of Transylvania” for “Outpatient Visit — Transylvania Hospital.”

Sconzo said he never went to the hospital, never had outpatient treatment and the primary care office that he visits is physically separate from and nowhere near Transylvania Regional Hospital.

With his wife unable to work due to an injury and with a bill for office visits that’s more than triple his earlier copay, he’s had to begin a payment plan to avoid collection and keep his credit record clean.

One of Sconzo’s co-workers at Connestee Falls, golf course superintendent Joey Galloway, said he also got hit with the new upcharge.

Last November, Galloway had blood work done at Medical Associates of Transylvania and returned later in the month to review the results. On his way out, he was told that he would get a bill for the copay.

Of the 91 employees at Connestee Falls, 58 full-time employees are insured by BlueCross BlueShield of North Carolina, according to Rocio Borghini, the Connestee Falls Property Owners Association human resources manager.

When a couple of employees expressed surprise about the new, costlier fee and wondered what it represented, Borghini said she contacted Mission’s billing office on behalf of the group.

After speaking to Mission’s billing department and expressing concern, Borghini was told to call the system’s business manager.

That was on Jan. 3, and despite multiple calls, no one has responded, Borghini said.

There also was no response to a message left on Mission Health’s Contact Us page.

With the average nonmanagement staff salary at Connestee around $30,000, single-income families in particular may be hit hard by the fee.

“All of the employees under our health plan are having this fee applied to their deductible,” Borghini said.

“I have employees who are on a single-income household, and now they’re facing these large bills that are coming through after the fact, after nondisclosure, and they’re being threatened with collections.”

Beyond that, employees who want to see a physician outside the Mission system to avoid the higher fee have limited alternatives.

“When we look at the list closely, most of them are associated with this Mission Health billing issue,” Borghini said. “So we’ve gone from having 15 physicians that they can choose from to having four.”

Within Facebook’s We Are Brevard NC public group, opposition to Mission’s outpatient fee has become more intense, with posts expressing displeasure over a lack of transparency and discussions about switching doctors.

State employees in Transylvania County and other parts of Western North Carolina who are covered by BCBSNC’s state health plan are also affected by the new outpatient charge, said Borghini, who previously worked at UNC Asheville.

“And hopefully, they’ll voice their opinions (Tuesday) Feb. 11,” she said.

That’s the day that Gibbins Advisors, the independent monitoring firm hired to keep HCA Healthcare accountable for the promises it made as part of its acquisition of Mission Health, hosts a town hall meeting in Brevard.

It’s expected that some patients with concerns about HCA’s outpatient fee will attend the session. But there may only be so much that Gibbins can do to quell their concerns.

While the firm is monitoring HCA Healthcare’s compliance with 15 obligations, oversight of billing is not explicitly mentioned.

Despite that, Ron Winters, Gibbins Advisors’ principal and co-founder, said recently that his firm will forward any and all concerns involving HCA to the appropriate parties. The firm also has a web portal, IndependentMonitorMHS.com, to receive stakeholder feedback.

Carolina Public Press contacted Mission Health on Wednesday to ask about the new outpatient fee. A spokesperson said Mission was aware of patient concerns and that a response is in the process of being developed.

Hospitals across the country acquired 8,000 medical practices between July 2016 and January 2018, according to a study by Avalere Health and the Physicians Advisory Institute. HCA’s acquisition of Mission Health became effective Feb. 1, 2019, and such hospital acquisitions have continued.

New fees imposed on patients following these acquisitions can help cover the ongoing cost of acquired infrastructure as well as other programs and initiatives.

Patients of Mission Health or other hospital systems who are unhappy with how such outpatient fees are being applied have several options they might pursue, according to online industry guidance.

When making an appointment with a new doctor, ask if they charge the extra fee.

If already covered by the fee, confirm that it may be applied against the deductible.

Or, try to negotiate an exception or reduced fee if no advance notice was given.

Christina Flynn, an administrative assistant at Connestee, reflects the viewpoint of the majority of her co-workers who have been affected by the outpatient fee.

“It’s not the doctors’ … fault,” she said. “It’s their billing practices.

“When they got bought out by the hospital and everything went through the hospital, things changed. To make no effort to communicate that to you, that’s what really makes me mad.”

HCA’s Independent Monitor continues to hold community meetings. Doors open 30 minutes before each event. The remaining sessions are as follows: