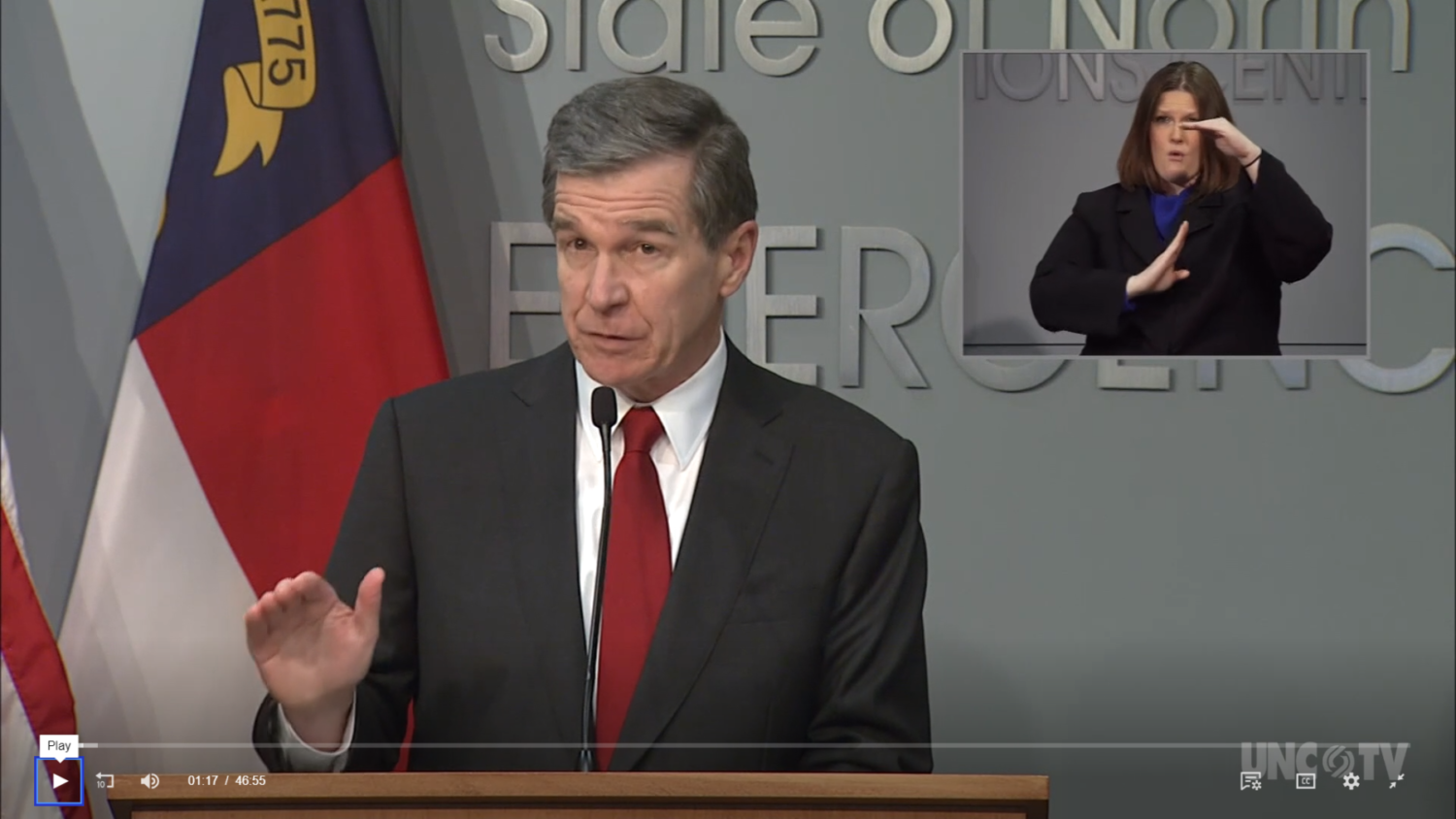 Gov. Roy Cooper announced Thursday that the state may be prepared to begin a very limited Phase 1 of reopening to commerce as early as next week. Cooper is seen here at a press conerence from mid-April.  Screen grab from UNC-TV

Next week Gov. Roy Cooper could relax the stay-at-home order he approved one month ago to slow the spread of the new   coronavirus. Last week he announced a plan to restart commerce in a three-phased approach to gradually return to public life.

No vaccine for the new coronavirus exists, and experts have said one could be more than a year away. An effective treatment for COVID-19, the condition caused by the virus, is also not widely available, though some remedies are being tested.

Cooper’s phases would begin only if public health officials see a downward or steady trend in the two-week average of several metrics, he said previously:

Cooper and Dr. Mandy Cohen, the state secretary of health and human services, expressed cautious optimism Thursday for moving to the first phase to reopen the state next week.

But he also urged people to “stay vigilant.”

“Complacency could risk lives and undo these plans,” Cooper said.

Even if the state moves to loosen restrictions on commerce, he said, people won’t shop if they don’t feel safe.

The stay-at-home order will remain in place for the first phase, however people will be allowed to shop at clothing stores, bookstores, houseware stores and other retailers. Gatherings will remain limited to fewer than 10 people, and officials recommend using a face covering where social distancing isn’t possible.

“I know this is a difficult time for many people, but there is hope, and there is a plan, and it is based on data and science and facts,” Cooper said. “It prioritizes the safety and health of our communities while looking at ways to jump-start the economy.”

Nationally, more than 30 million people have filed for unemployment since mid-March, according to economic data from the Federal Reserve Bank of St. Louis.

Cohen said hospitalizations are starting to level off. While the number of positive tests released Thursday was the largest jump since the pandemic began, at 561 more positive COVID-19 tests, the more than 9,500 tests also constituted a high-water mark.

The state has said labs will need to consistently process samples from 5,000 to 7,000 tests per day.

As the stay-at-home order continues, Gaston County Commission Chairman Tracy Philbeck said Wednesday the order should end for his county. His pronouncements throughout the day caused several businesses to announce reopening, only to close later after realizing the state order remains in effect.

“That action created confusion in a pandemic, and that’s dangerous,” Cooper said. “I was pleased to see all of the municipalities in Gaston County come forward and say they want to continue to abide by the order and do the right thing.”

If the trends continue to improve, after two or three weeks Cooper has said, he could lift the stay-at-home order, with vulnerable populations encouraged to remain at home. Phase 2 would also include the limited opening of restaurants, bars, gyms and barbershops.

A group of restaurants in the Raleigh area urged the governor not to open restaurants until they can safely operate at full capacity, saying they cannot make a profit with partially full dining rooms.