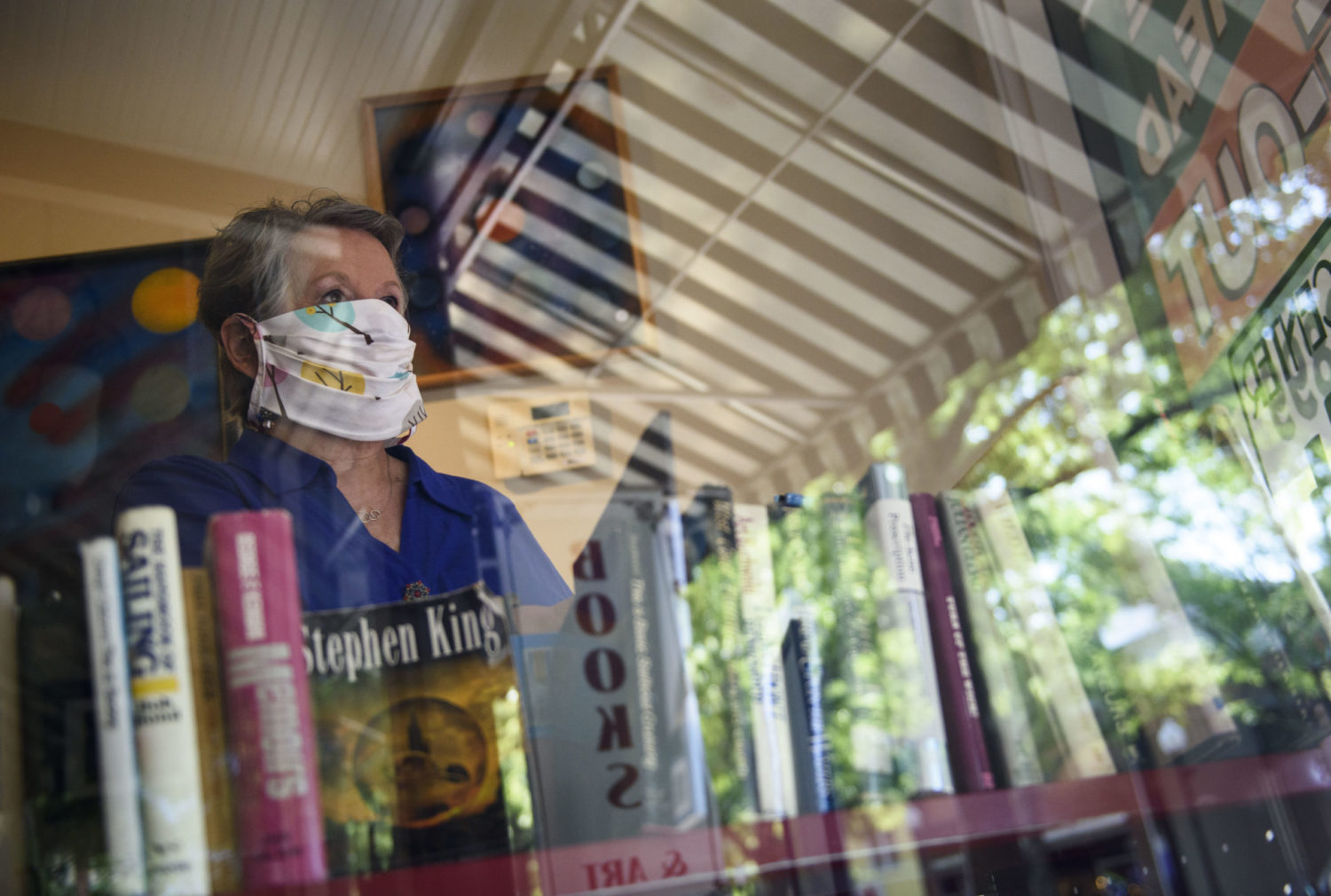 Diane Parfitt looks out the window of her store City Center Gallery & Books in Fayetteville on Monday. Parfitt’s shop has gone through the process of reopening in recent days, returning to mostly regular hours with the requirement that customers wear masks while they shop. Melissa Sue Gerrits / Carolina Public Press

A few minutes after 10 a.m. Saturday, Diane Parfitt opened the door to City Center Gallery and Books in downtown Fayetteville to welcome her first customers in 47 days.

A mother and daughter entered the 1,600-square-foot art and used books dealer, purchased a couple of children’s and adult books and then left.

Parfitt called their presence in the store “fabulous,” not just because she was physically greeting customers for the first time in more than a month but also because everyone that morning had entered wearing masks.

“We were a little concerned that they may not want to wear a mask and we are requiring it,” Parfitt said, explaining that she has a standing supply on hand in case someone arrives bare-faced. “I’m just really pleased with that.”

“The thing that’s helped us with Amazon is their delivery is slow,” Parfitt said, referring to the online giant that has taken a huge volume of business away from independent bookstores over the years.

Now that businesses like Parfitt’s are allowed to reopen under the first phase of a three-stage reopening, they can only admit customers up to 50% of capacity, must adhere to social distancing rules and must regularly disinfect their properties.

Phase I of reopening in North Carolina is scheduled to expire May 22. Depending on how the governor decides COVID-19 is trending, additional limitations on businesses could be eased, or the heavier layer of restrictions prior to Phase 1 could be reimposed. Parfitt and other merchants are taking a wait-and-see approach before returning to normal hours.

Ordinarily open until 8 p.m. Saturdays, Parfitt closed at 6 last weekend and delayed reopening on Sundays until further notice. That’s because many churches in Fayetteville are still holding services online and neighboring restaurants downtown remain barred from offering indoor dining, with the effect of reducing spillover business that benefits stores like Parfitt’s.

Overall, Parfitt estimates that her business attracted more than half of the foot traffic that it normally gets on a Saturday.

Having gotten through the weekend, Parfitt remains frustrated with the slow pace of the U.S. Small Business Administration’s Paycheck Protection Program, which helps cover a qualifying business’s overhead but rapidly exhausted its first round of funding.

The SBA resumed accepting program applications from participating lenders on April 27. Parfitt said she’s in the queue with an SBA lender but still hasn’t received forms to fill out. 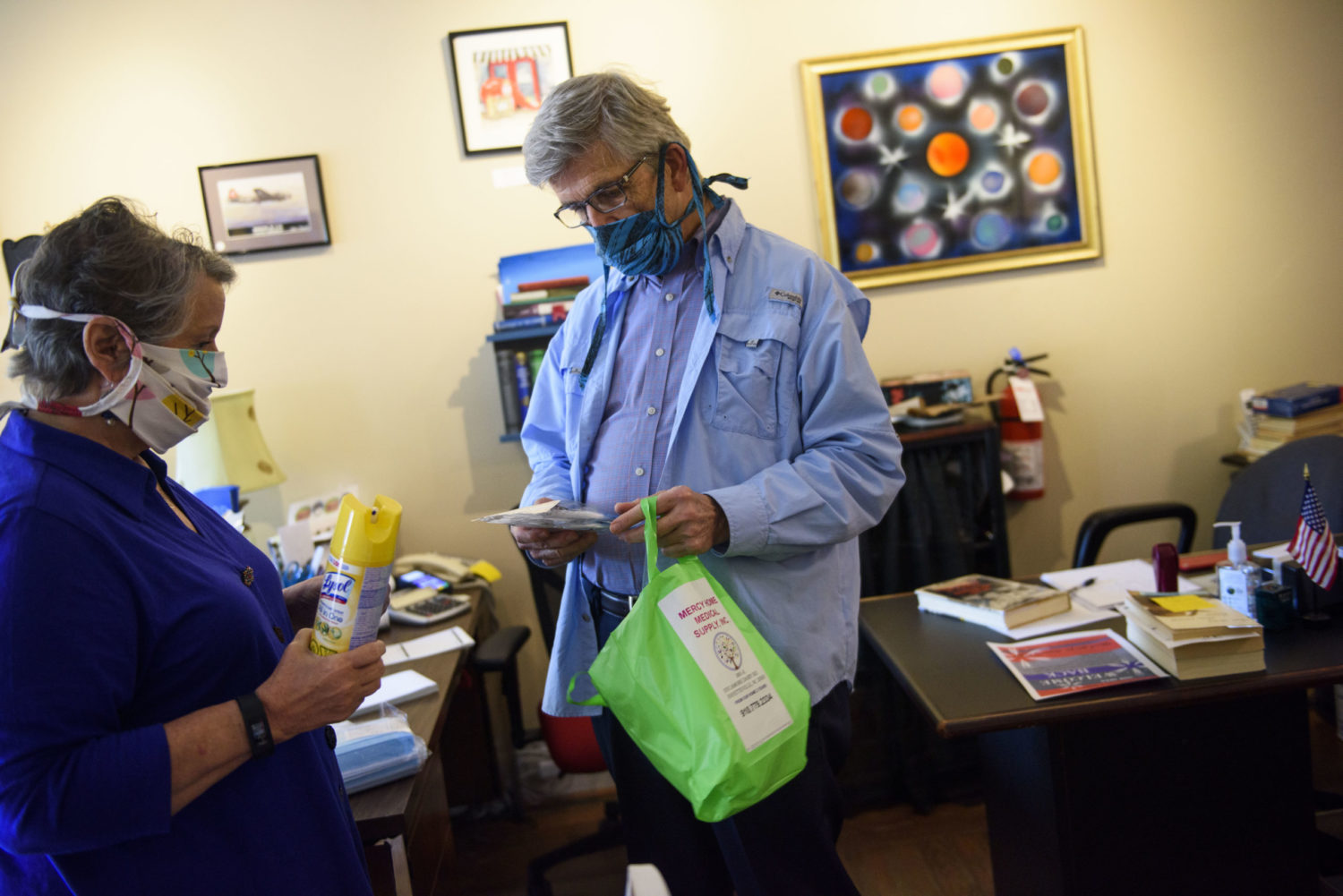 Hank Parfitt, right, brings a can of lysol and newly purchased masks to his wife Diane Parfitt for the reopening of her book store City Center Gallery & Books in Fayetteville on Monday. Melissa Sue Gerrits / Carolina Public Press

No hurry at Mast

At Mast General Store, the cavernous independent retailer in downtown Asheville, Carmen Cabrera doesn’t need a mask. That’s because all of Mast’s stores have no immediate plans to reopen.

For the past several weeks, Cabrera, the general manager, has answered the phone, taken online orders, shipped out merchandise and engaged in markdowns, surrounded by leftover winter supplies and newly arrived items for spring.

“We’re going to wait a couple more weeks … play it safe and go from there,” Cabrera told Carolina Public Press.

With the stay-at-home order having frozen in-store business and with difficulty obtaining a sufficient supply of personal protective equipment, “I would say the majority of our employees in the stores outside of management were furloughed,” said Sheri Moretz, a company spokesperson.

Mast employs “just above 500” workers at its Valle Crucis headquarters and at stores in North Carolina, South Carolina, Tennessee and Virginia, where the opening of its first store has been postponed.

A phased reopening will be based on several factors, Moretz said. “There’s a lot of situations that have changed from the B.C. (before coronavirus) era,” she said, including employees who no longer have child care coverage or who are caregivers for a family member.

Mast is committed to protecting the health of its customers and employees, Moretz said, but “the supplies that we need in order to reopen … are difficult to find.”

The number of employees who return to work will be dictated by the level of business experienced during the company’s initial reopening so it can “learn and apply” how other stores should go live, she said.

“We want to make sure we get the reopening right and everyone is safe.”

Belk, the Charlotte-based department store chain that serves as an anchor at many shopping malls and other plazas in North Carolina, reopened with limited hours Monday.

Stores will be open noon-6 p.m., and the retail chain will limit the number of shoppers to 50% of occupancy per state guidelines.

Sixty-three of Belk’s 64 stores in the state reopened Monday. The Durham store will reopen Wednesday because of a local ordinance. Curbside pickup is available at select stores.

Customers who enter the stores will be met with new public safety measures, including “aggressive” cleaning schedules in high-touch areas, daily temperature checks on associates and a requirement that they wear masks. Fitting rooms are closed, and cosmetics testing is not available.

While auto dealerships were deemed essential in the governor’s stay-at-home order, an increasing percentage of purchases since late March have been made online for safety reasons.

To help seal a deal or maintain customer loyalty, sweeteners like the delivery of vehicles to buyers’ homes and the pickup and return of vehicles to be serviced have become more routine.

But with more than 1 million North Carolinians already having filed unemployment insurance benefit claims since March 15, big-ticket items such as cars and trucks may represent a new form of sticker shock.

In a sign of industry softness, the N.C. Department of Commerce has just posted notifications of temporary layoffs by Asbury Automotive Group at dealerships in Fayetteville, Durham and Greensboro that affect a total of 190 employees.

A similar notice by Cox Automotive will impact 402 employees in Iredell and Johnston counties, effective next week.

While the automotive sector appears spotty, other businesses considered essential are faring quite well.

McDonald Lumber Co. in Fayetteville has been “slammed,” said Richard Stallings, a stockroom worker at the supply company that serves do-it-yourself customers and general contractors.

People told to stay at home have had ample time to catch up on around-the-house projects, and contractors “have as much as they can handle,” Stallings said, making business brisk.

“A lot of what we do is geared to the edibles” that have taken on special importance during a time of potential supply chain disruptions and heightened food insecurity, he said.

“I wish I had twice the number of parking spots,” Israel said.

The business is on the grounds of the Western North Carolina Farmers Market.

At Blackstone Shooting Sports, a gun shop and shooting range in metro Charlotte, “people were picking up a lot of ammo” in the early stages of lockdown, and they’re putting that ammo to use at Blackstone’s shooting range, said Calvin Firms, a sales associate.

“We’ve been doing record numbers every single day,” Firms said, with 30,000 purchases of merchandise daily at the time when stay-at-home began rising to 80,000 daily purchases.

“Everything was going; it really didn’t matter the price point,” he said.