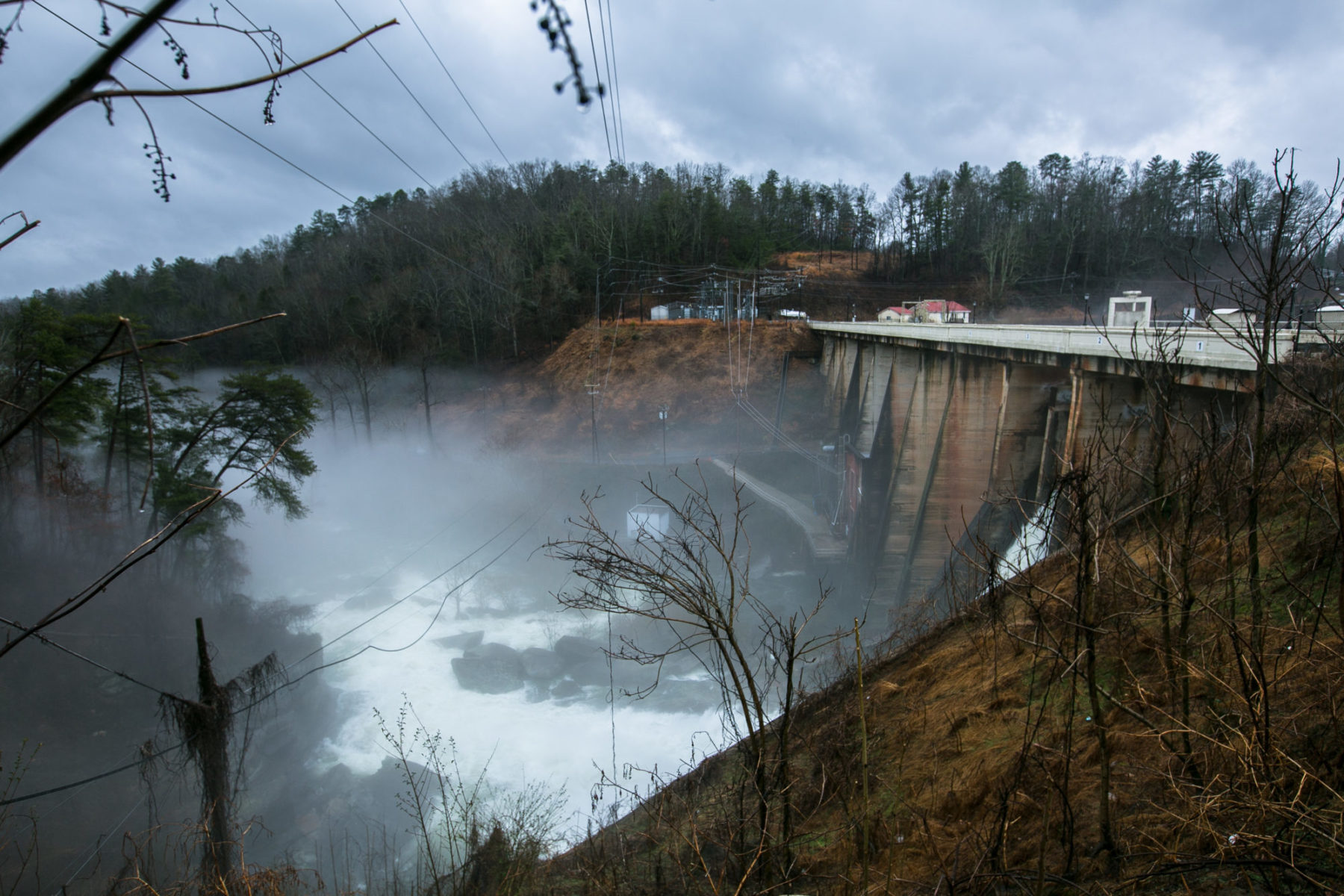 The town of Lake Lure is preparing to undertake a costly repair project on its dam after years of what the town’s engineering consultant called “neglect.” Colby Rabon / Carolina Public Press

Earlier this year, the N.C. Press Association recognized Carolina Public Press for its strong work in investigative journalism, awarding the nonprofit news organization first place for investigative reporting among the state’s online publications for “Questionable Care,” which exposed vast problems in the quality of care some adult care homes offer residents, many of whom live with mental illness. It also examined whether state regulators effectively and consistently oversee these homes. of which there are about 1,200 operating in the state.

Investigative journalism in the public interest is an essential mission of Carolina Public Press. It involves digging up stories that have been hidden. State databases contain some pieces. Emails between corporations and government officials contain others. Court filings may add to the collection. Verbal accounts from eye-witnesses include more. Interviewing dozens of people for one story is sometimes necessary to reach the truth.

This — the second of two articles looking back at CPP’s work in 2018 — focuses on some of the year’s top investigative journalism projects among the 140 news reports our staff published. From the treatment of jail inmates to residents in adult care homes, from pushing for records about a sheriff candidate accused of stalking to maintenance of critical infrastructure and the lobbying activities of former legislators, CPP invested thousands of reporting hours, reviewed thousands of public documents and traveled across North Carolina to provide watchdog, investigative reporting — reporting that can, we proved in 2018, have dramatic and immediate impact in our communities across the state. 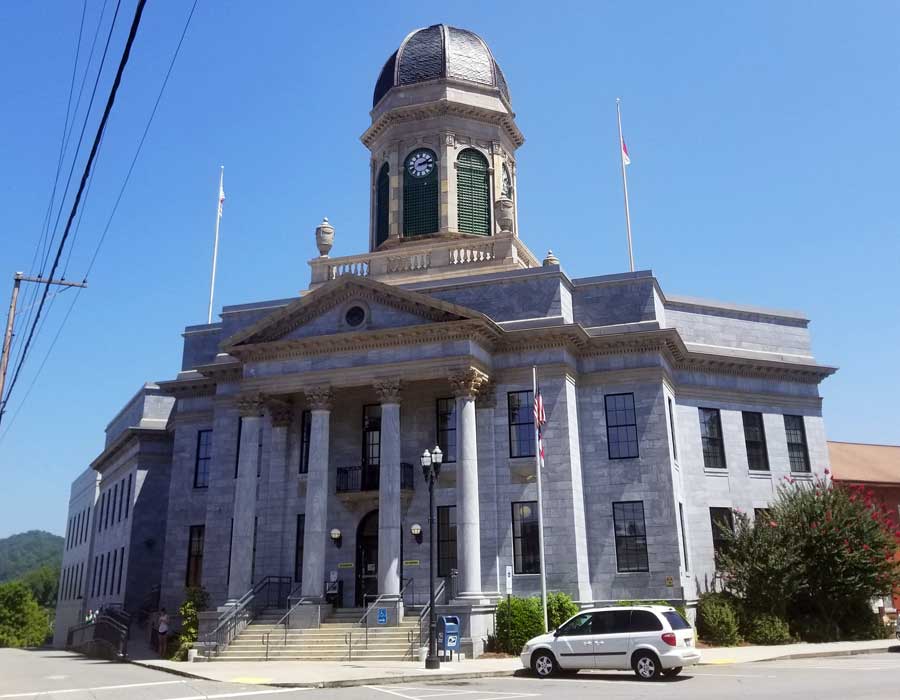 1. Inmate treatment in a county jail

In late spring 2018, CPP news staff began receiving tips about alleged problems at the Cherokee County Detention Center, the jail in Murphy. That began what is now an ongoing investigative reporting project, I N M A T E, which focuses on jail conditions in North Carolina.

This project crosses county and state lines, spanning about eight months and taking 300 hours of work so far for four reporters and editors. We’ve submitted more than 35 public records requests and reviewed more than 600 pages of documents related to the project, specifically on multiple incident reports related to inmates and activities in the jail. Our reporters and editors have talked to and interviewed more than 40 people – including community members, deceased inmates’ families, former jail guards, local officials, state officials, law enforcement at the local, state and federal level, other media organizations, the sheriff and county attorney, the local district attorney and more. This reporting has been republished in local, community newspapers, in major metro newspapers, been featured on statewide public radio and appeared in top national online news sites.

Verifying details of what happened through court records, interviews with public officials and with one of the guards, and a partial release of public documents, CPP published a first article on June 1, headlined “Guard fired after scrap with inmate questions handling of case as SBI investigates.”

Over the next several months, CPP talked with dozens of individuals and gathered a large volume of records. At one point Sheriff Derrick Palmer authorized the release of more than 500 pages of public records CPP had requested, though he partially obscured portions of several of the most important documents without warning.

On Oct. 29, CPP published “Former guards allege pattern of inmate abuse at NC county jail.” Within days, jail administrator Mark Patterson resigned and CPP quickly followed up Nov. 2, with a report on his departure and on a radio broadcast in which Sheriff Palmer forecasted changes while denying knowledge of previous complaints about inmate mistreatment.

The publication of a new story on Nov. 28, raised doubts about the sheriff’s previous statements in light of emails warning him in 2017 about an inmate left chained, naked and screaming, at the jail. The story developed rapidly, culminating with plans for a broad State Bureau of Investigation probe of Palmer’s administration that District Attorney Ashley Welch predicted would be the largest in western North Carolina history and take more than a year.

All the while, CPP continued asking for public documents about incidents in the jail. The release of several previously obscured public records brought the most recent article on Dec. 21, which reported on how jail employees handled one inmate’s urgent medical issues in July. The inmate later died. 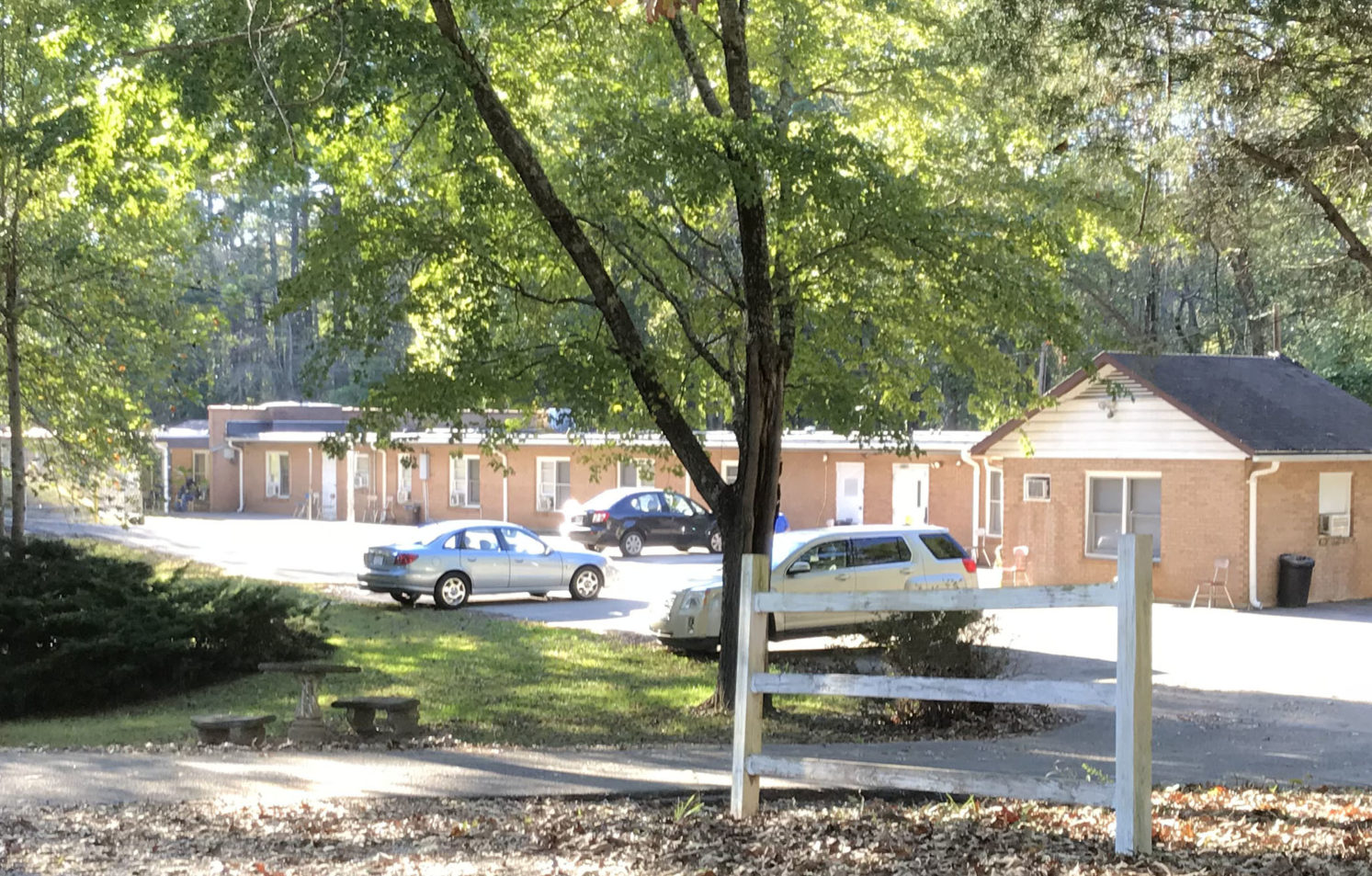 Cedarbrook Residential Center of Nebo is an 80-bed adult care home in McDowell County. Negative state findings and penalties against Cedarbrook disappeared as part of court-ordered compliance with a settlement agreement in January 2017. The state again cracked down on the facility in late 2017 and successfully defeated the owner’s legal challenge in early 2018, though the state later dropped its penalties when new inspections identified improvements. Michael Gebelein / Carolina Public Press

CPP’s award-winning investigation of adult care homes did not end when the calendar flipped over in January. Much of our reporting in early 2018 focused on the state’s new efforts to crack down on Cedarbrook Residential Center in McDowell County, and on Cedarbrook owner Frederic Leonard’s legal battle to challenge the state’s findings and penalties. During a previous appeals process in 2016 that received no news media attention at the time, the state had agreed to “withdraw” negative findings and penalties against the facility, which at the time were the most expensive against any adult care home in North Carolina.

With CPP closely following the process this time, the state did not accept a settlement and the judge ultimately upheld penalties against Cedarbrook. Only after new inspections reported substantial improvements did state officials lift an order for the facility to stop admitting new residents.

CPP’s investigation also looked at questions surrounding another company tied to Leonard that provides behavioral health services, typically billed to Medicare. CPP used records from regional behavioral services managed care agencies to confirm that this company had been contracted to provide care to residents at Cedarbrook, raising questions about a potential conflict of interest.

In addition to the issues with one adult care home, CPP also reported on the wide range of politicians in North Carolina who have benefited through the years from the adult care home industry’s generous, and bipartisan, political giving.

CPP additionally reported on the findings of a study of the state’s star-rating systems for adult care homes and the annual report of an independent observer assigned to monitor North Carolina’s compliance with a federal settlement, who said the state is not on track to meet its obligations to improve options for mentally ill adults by a 2021 deadline. 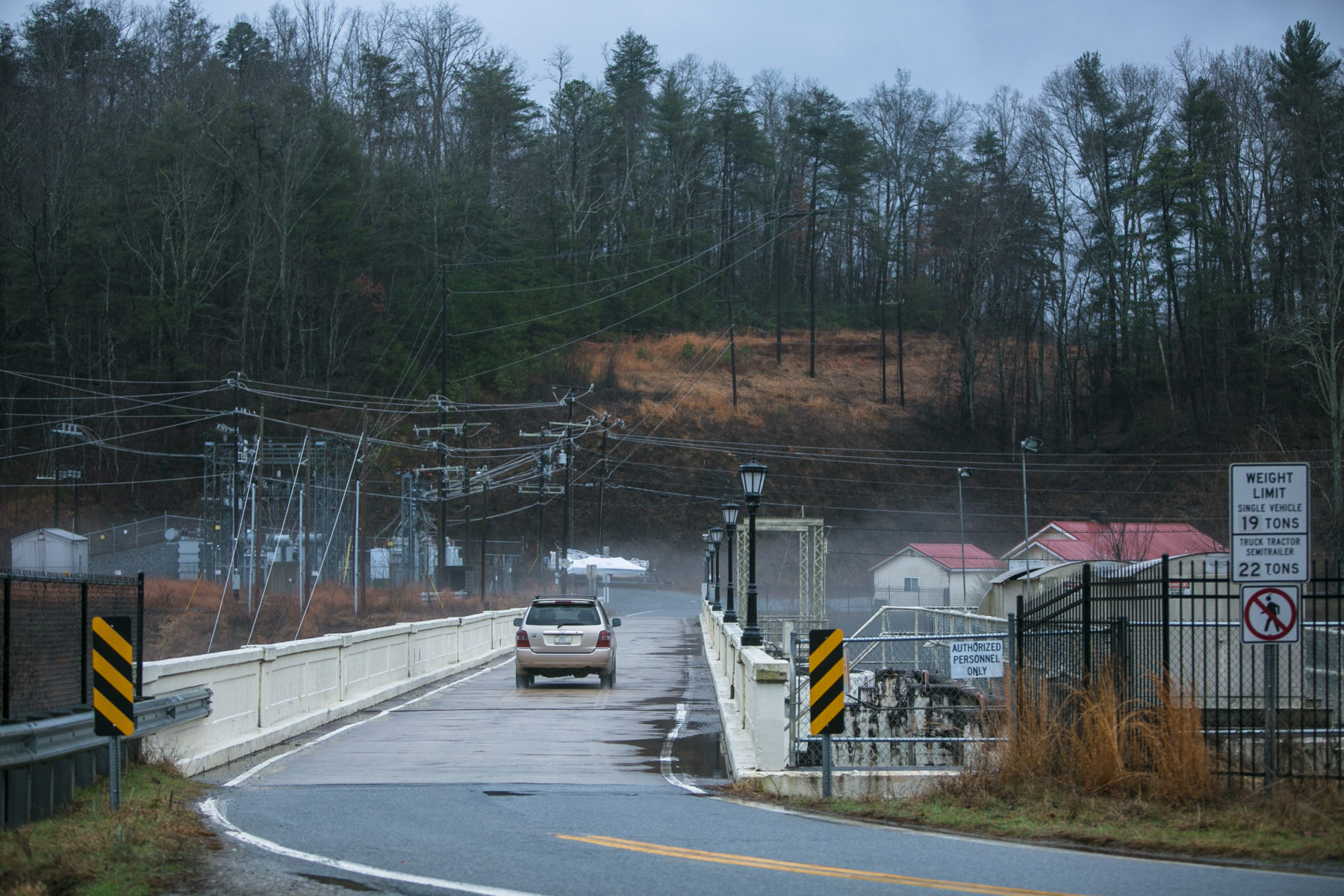 Lake Lure is a picturesque small lakeside mountain town in Rutherford County, which wouldn’t exist without the century-old dam that creates the lake. CPP began receiving tips from residents in early 2018 that something odd was going on with the town’s oversight of the dam.

Following multiple requests for records from the town and the N.C. Department of Environmental Quality, as well as multiple interviews, a previously hidden story began to emerge. CPP reported on March 21 that DEQ and its predecessor agencies had warned town officials for more than a decade that they were badly behind on inspections and maintenance for the dam, which was considered high-risk due to the volume of water it holds back.

The town’s current administration decided that ignoring the warnings was a bad idea. Making up for lost time was going to be expensive, but the dam could be saved if the town acted quickly.

CPP followed up on this story after Hurricane Florence in September, with town officials saying they had weathered both that storm and Tropical Storm Alberto. Meanwhile, they continued their efforts to comply with the DEQ’s guidance while searching for financial means to pay for the massive overhaul project. 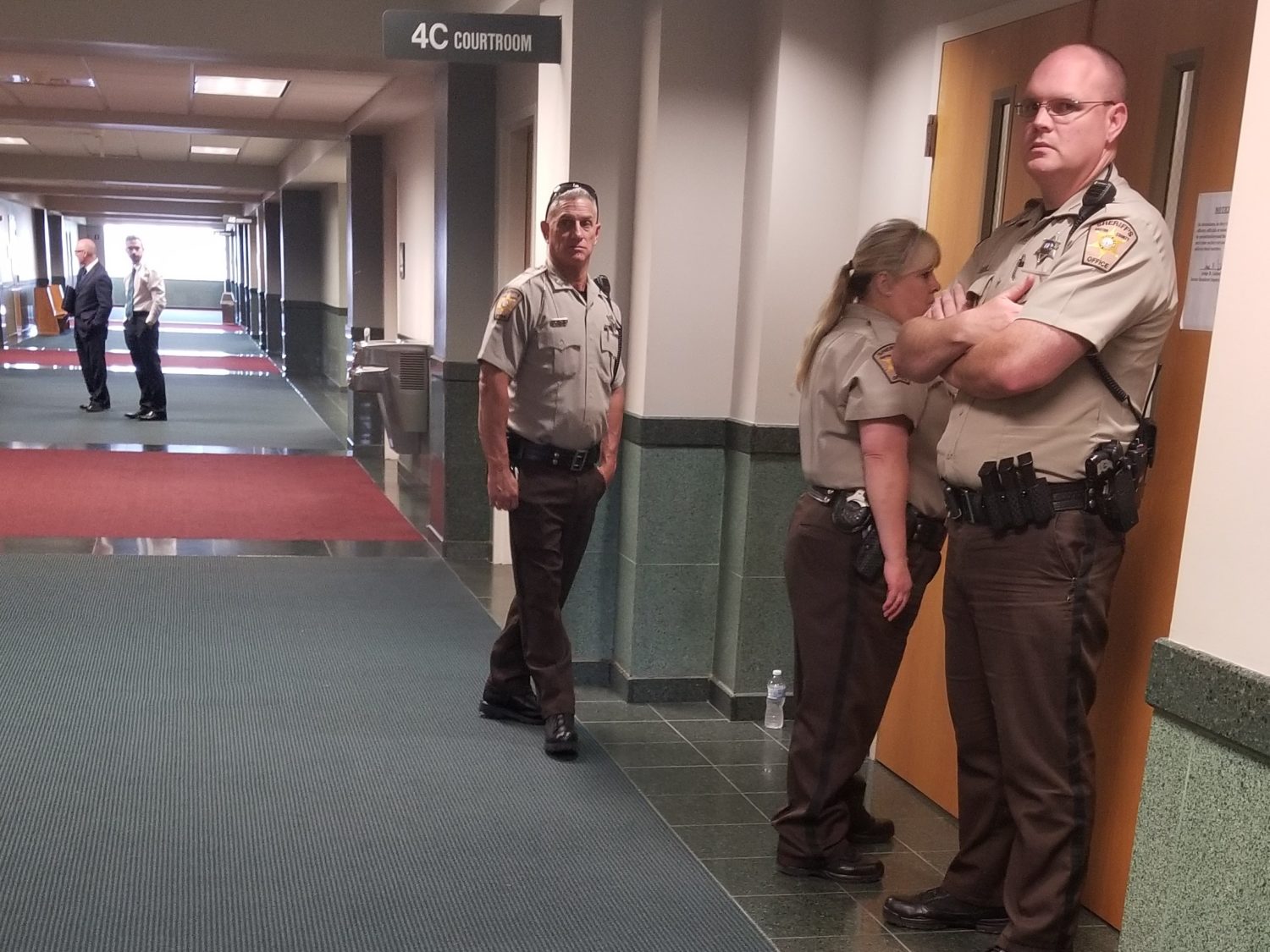 Gaston County deputies block news media access to courtroom 4C on Thursday in Gastonia after telling a TV reporter he could not place his camera across from the doors. The courtroom was the site of a hearing on SBI warrants in the investigation of Jason Reid, a candidate for Catawba County sheriff and son of the current sheriff. Frank Taylor / Carolina Public Press

In April, CPP joined a coalition of newspapers, television stations and the Associated Press in petitioning the courts to disclose the contents of a search warrant sealed by a Catawba County judge under unusual circumstances.

The State Bureau of Investigation had been quietly investigating Jason Reid, son of then-sheriff Coy Reid and a former deputy in both Catawba and Lincoln counties. A former girlfriend accused the younger Reid of planting an electronic device on her vehicle and stalking her, according to an SBI search warrant.

Thanks to the coalition’s legal efforts, a judge agreed to unseal that warrant just before the May primary for sheriff, in which Reid was campaigning to replace his soon-to-retire father. In the warrant, the SBI described its agents’ success in matching equipment found on the accuser’s vehicle to equipment used by the Catawba County sheriff’s office.

Reid lost the primary and was later indicted.

In a series of reporting that appeared over the summer, CPP documented the efforts of Partners Behavioral Health, a regional Local Management Entity-Managed Care Organization (or LME/MCO) based in Gastonia, to recruit Rutherford County away from its current LME/MCO region, under Asheville-based Vaya Health.

The move would potentially affect all counties in both LME/MCO regions, which include most counties west of Charlotte.

Partners contracted with two former Rutherford legislators to lobby their former colleagues at the General Assembly. But in this case, records show the newly minted lobbyists were working in the other direction, on their former constituents.

The third installment in the series on July 13 revealed the degree to which former state Sen. Debbie Clary and Rutherford County officials were working to change mental health care systems.